I’m a little romantic about trains.  I love the idea of rides across the empty prairies at the early part of the 20th century, and big stations welcoming visitors from across the country.  Dallas’ Union Station is certainly one of those big stations.  It was built in 1916 and features the grand and ornate classical arched windows, high ceilings, flat roof, pilasters and symmetry of the Beaux-Arts Architectural style, seen in many US train stations, including New York’s Grand Central Station.  It’s $23 million dollar renovation in 2008 and listing on the National Register of Historic Places however, does nothing to prevent you from a twinge of disappointment when you step inside.  Missing are the expected lines of people waiting to purchase train tickets, newspaper and coffee stands, and general noise and commotion you would expect. Helpful and friendly concierges stand ready to assist, but automatic ticket kiosk and online tickets have taken away most of the human elements of the day-to-day running of the station.  Amtrak trains stop only twice a day, and the commuters on the TRE and DART rarely step foot inside.  Today, Union Station’s main use is as a premier event destination on the upper floors, a joint venture with Woodbine Development and Wolfgang Puck Catering.  Pedestrian tunnels link the rail platform to nearby Reunion Tower and Hyatt Regency Dallas.  Progress, it seems, has sidestepped the historical concept of the train station, but not really.  After all, what is a station but a doorway to an adventure, and outside the doors of Union Station, Dallas is an adventure that’s just waiting on you!

We spent a beautiful January day riding the TRE from Dallas to Fort Worth and back, stopping at the stations along the way that had something of interest or in close walking distance.  Since the TRE is a commuter train, many of the stations are just park and ride lots, but some, like Fort Worth T & P and Dallas’ Victory Station and Union Station offer plenty to do in walking distance for a full day of fun!

The TRE is a commuter train serving Fort Worth, Mid-Cities, Irving and Dallas, with it’s most eastern stop in Dallas’ Union Station.  To read more, click HERE. 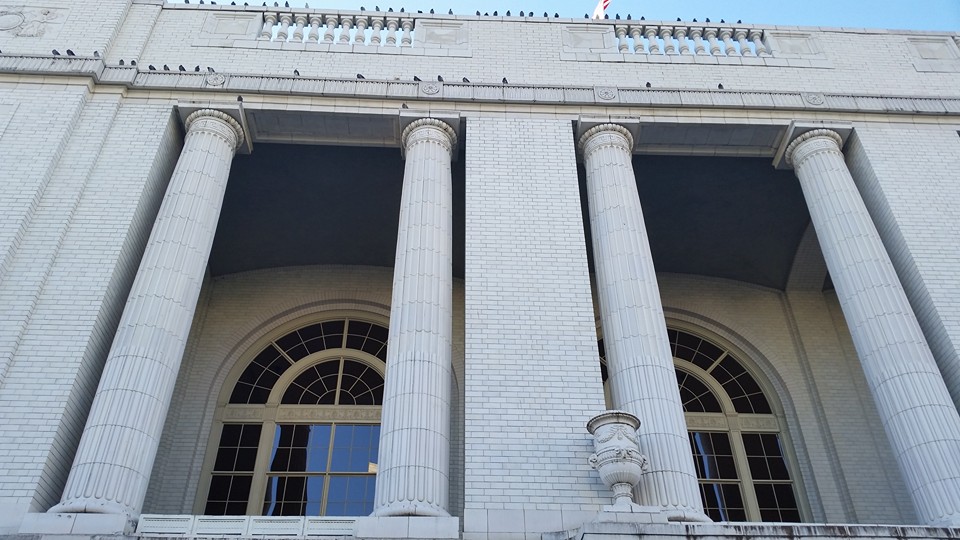 Union Station underwent a $23 million dollar renovation in 2008, and now offers “11 unique spaces ranging from 367 to 8,594 sq. ft.” available to rent for weddings and special events, large and intimate!  Owned by the city of Dallas, it’s on a long-term lease with Woodbine Development and Wolfgang Puck Catering.  See the link at the bottom for more information.

Ferris Plaza consist of a big fountain, trees and benches.  It’s right across the street from Union Station and the Dallas Morning News, and a nice place for pictures.  From 1925-1950 there was a waiting station at this location, that greeted visitors from the trains and where they could catch a streetcar.  For more information, click HERE.

See Dallas from the 360 degree GeO-Deck at Reunion Tower, 470 feet above the ground!  Click HERE for more information.

Originally the 1892 Old Red Courthouse of Dallas, it is now a museum featuring history of the North Texas area.  Don’t miss a guided tour of the museum itself, free with museum admission!  From the street, be sure to notice the four terra-cotta wyverns (serpents) sitting atop the museum.  Click HERE to read more.

The Sixth Floor Museum takes you on a tour of the events that led up to JFK’s assassination in 1963.  Click HERE to plan your visit.

Even if you don’t have plans to visit the Sixth Floor Museum, you can still take a walk through Dealy Plaza.  Fountains, statues and a big grass hill.  Walk to Elm Street to see the X in the road where Kennedy was shot.  While your standing there, tell your social media friends to see you on EarthCam’s Live Stream from the Sixth Floor, then start waving!  Click HERE to visit their site.

The Core Exhibit takes a look at the events of one day during the Holocaust.  Check the museum’s website for special events and speakers.  Click HERE to visit their website.

Grab lunch or dinner at one of the restaurants in the West End.  My kids love the Hard Rock Cafe!  Browse the cowboy hats, boots and more at Wild Bill’s Western Store and take a Segway Tour or Carriage ride.

Instead of destroying the old vacant warehouses in the West End where the DWA planned to build their new aquarium 1992, they renovated the buildings to create a completely unique space, although it’s difficult to notice the architecture because you’re too busy eyeing the sharks swimming over your head!  Click HERE to read more.