Dealy Plaza is considered the most visited tourist destination in Dallas, and on almost any day you’ll find the grounds full of people.  The 3-acre park was originally built in 1940 as an impressive gateway to downtown, but in 1963 became renown as the location where President Kennedy was assassinated.

Visitors can park at the Sixth Floor Museum for a fee.

Vendors selling various Kennedy memorabilia usually stand on the sidewalks around Dealy Plaza and the Book Depository Building, many with interesting conspiracy theories!

Situated at the top of the hill, with a large grassy area rolling down towards I-35, it’s easy to see how this was considered a grand entrance to the city back when it was built.

The pergola closest to the Elm Street is where Abraham Zapruder was standing when he unexpectedly filmed President Kennedy’s assassination with a home movie camera.

Don’t grab your swimsuits, these pools are only a few inches deep, and swimming wouldn’t be advised, and probably not allowed. 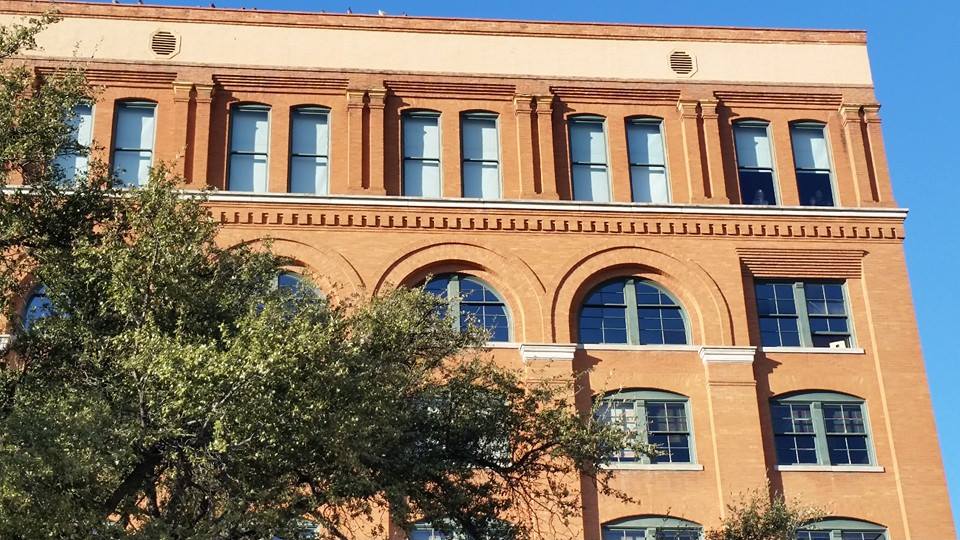 Across Elm Street is the famous School Book Depository, where Oswald worked and from where he fired the shot that killed President Kennedy.  You can see the window from where he shot is marked.

An X in the road marks the spot where President Kennedy was when the bullet struck him.  Rumor has it that the X has been removed several times by the city, but it keeps returning.  There’s no telling how accurate it’s location actually is.

Learn much more about the events that led up to Kennedy’s assassination at the Sixth Floor Museum, and see exactly where Oswald was when the fired Dallas’ most infamous shot.  Click HERE to read more.

We visited Dealy Plaza as part of our TRE Day, when we rode the Trinity Railway Express commuter train from Dallas to Fort Worth, and stopped at many of the stations along the way to explore everything in walking distance.  Union Station is just a few blocks away, and was an easy walk to Dealy Plaza, before we continued to Dallas’ West End for lunch.

Mounted near the window where Oswald shot, EarthCam has a 24/7 live streaming camera.  Click HERE to visit their site.

We haven’t done this yet, but I felt I should include this link for a tour.  The longer tour takes you to Oswald’s rooming house and the Texas Theater.  Click HERE to visit their site.

Nearby Things to do

Record Grill on Elm is small and unpretentious, but it will take you back to the days of diners.

Originally the 1892 Old Red Courthouse of Dallas, it is now a museum featuring history of the North Texas area.  Don’t miss a guided tour of the museum itself, free with museum admission!  From the street, be sure to notice the four terra-cotta wyverns (serpents) sitting atop the museum.  Click HERE to read more.

Dallas Holocaust Museum’s The Core Exhibit takes a look at the events of one day during the Holocaust.  Check the museum’s website for special events and speakers.  Click HERE to visit their website.

Keep Having Fun in the TEXAS Sun!