Twas the Night Before Christmas, the classic story, told in a completely new and different way! We absolutely loved this show, it was lively and exciting, with great music and a fun storyline but all the thrills you expect from Cirque du Soleil! Check out my tips before you go and then the press release, because the one thing I didn’t get are pictures!

Texas Trust CU Theater is a small theater so there really weren’t any bad seats. Try to stay in the center, and honestly for this show I think we were a little low. I walked to the back for perspective, and I think center up gives you a better view.

There were concessions available before the show, merchandise and some photo ops.

There’s not an intermission, so take the kids (and yourself) to restrooms before the show begins. Trust me, you’re not going to want to miss anything!

There were a ton of young children at the show, although I didn’t really notice them at first. About half-way through, I started hearing them more and more, (not distracting, I was just listening for the review) and at the last 1/4 of the show I saw some children and parents leaving. We attended the 7:30 show, which let out at 9pm, so it was late for them.

Click HERE to listen to the soundtrack. We did this a day or so before we went and in the car ride there, and I really enjoyed it.

‘Twas the Night Before… is Cirque du Soleil’s  first Christmas show, based on the classic poem  “A Visit from Saint Nicolas” by Clement Clarke Moore.  Memorable lines from this cherished classic inspired  Cirque’s story about a jaded young girl who rediscovers  the magic of Christmas. A festive flurry of love and  cheer created especially for families, ‘Twas the Night  Before… features thrilling acrobatics, lovable characters  – and a soundtrack including Christmas favorites  re-invented by Cirque du Soleil.

In 2022, in a Cirque du Soleil first, ‘Twas the Night  Before… will play two cities simultaneously during  its four-city run, requiring two casts and two crews  operating at the same time.

The show was conceived and is directed by Cirque du  Soleil Senior Artistic Director James Hadley, a 25-year  veteran of circus productions and live theater.

‘Twas the Night Before… runs from November 25  to December 11 in Boston and Dallas, and from  December 15 to 26 in Detroit and Phoenix. 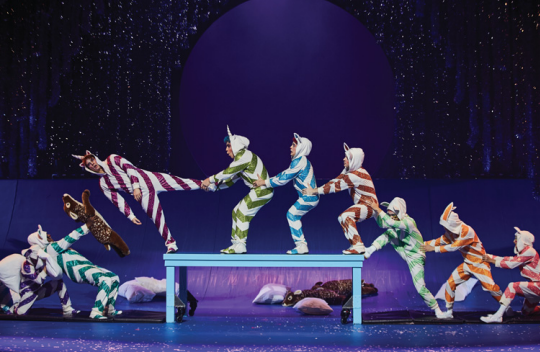 It’s Christmas Eve, and this year, things are different.  For years, Isabella and her father have read “A Visit  from Saint Nicolas” “Twas the Night Before Christmas”  together. But this year Isabella feels like she’s  outgrown the family tradition. But then the magic  of the poem comes to life, and Isabella and her father  are unexpectedly separated by a snowstorm that  sends them on a fantastical journey.

In a winter wonderland inspired by the poem, they  discover whimsical characters, acrobats, children  and reindeer who reunite father and daughter in  the spirit of Christmas.

As with every Cirque du Soleil show, bringing colorful  characters onstage requires the Makeup and Hair  department to deliver its best. ‘Twas the Night Before… called for 13 makeup concepts to be designed and  applied. This requires 25 pots of glitter and 60 cans  of color hair spray to be used during the show’s run.  340 make-up brushes are used every night, and each  artist will apply their makeup using between 11 to  24 different products. Makeup and hair also include  wigs and hats: 10 wigs and eight hats with reindeer  antlers, and 22 beanies/knitted wool hats (which  Canadians proudly call “tuques.”)

Cirque du Soleil prides itself on its long-standing  practice of carefully hand-crafting its costumes.  The Santa Claus costume is completely handmade.  52 different costumes are used in the show, including  eight reindeer costumes. These require 125 different  fabrics and materials, and 2,000 sequins per costume.  And, of course, because it’s a Christmas show, lots  of pompoms. 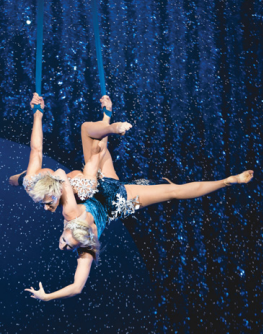 ‘Twas the Night Before… requires less cast and  crew than some of the company’s larger touring  and permanent productions. There are 16 men and  10 women in each cast, from 14 different countries.  The show requires a touring crew of 17 support staff.

‘Twas the Night Before… requires 800 man-hours  to load in 100 tons of equipment, and 200 for the load  out. If all the cables in the show were connected in  one line, it would extend five miles.

Statistics reveal the extent of the acrobatic skills  displayed in ‘Twas the Night Before…:

• The top speed reached in the Roller Skate number  is 30 mph. It is performed on a platform 6 feet  in diameter, weighing 250 pounds.

• Eight diabolos are used simultaneously in the  Diabolo act, and they reach a speed of 20 turns  per second.

• The Strap Duo act is performed 20 feet in the air. 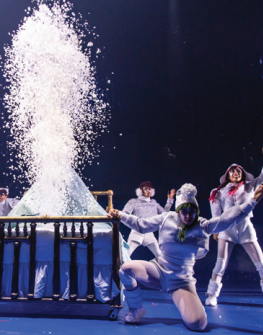 • The artist performing the Hair Suspension act  performs approximately 100 turns. At top speed,  she spins at seven turns per second. Her hair  can withstand 250 lbs. of pressure.

• In the Hoop Diving number, the highest hoop  is set at 10 feet, and the smallest hoop is 18 inches  in diameter.

Jean-Phi Goncalves is the Composer and Musical Director of ‘Twas the Night Before… The show features  41 pieces of music throughout – 29 of them original. He also revisited 12 famous Christmas songs, including  Jingles Bells, Silent Night, Deck the Halls, and more. The result is a unique blend of the kind of musical  signature audiences expect from Cirque du Soleil with the familiar, celebrated tunes beloved by so many. 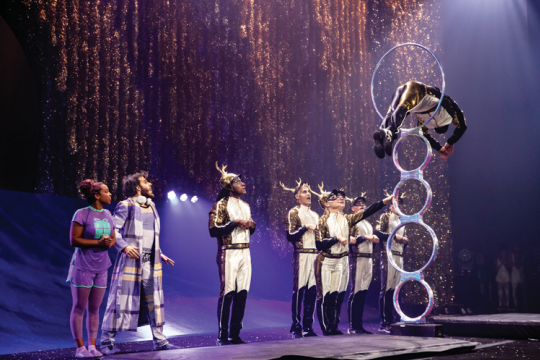 Isabella is a young girl who loves everything trendy  and new. She’s reached an age where she’s no longer  excited about the joy of Christmas. She takes her family  for granted and has no patience for her father and his  attempts to connect.

Isabella’s Dad is frustrated that his once close  relationship with his daughter has been disrupted by  smart phones and social media. He hopes the magic  of Clement Moore’s famous poem will reawaken  her passion for Christmas.

Jolly is a colourful and comedic free spirit who becomes  Isabella’s guide. His kindness and humour are true  beacons of the human spirit. Only at the very end is  his identity revealed – he’s Santa Claus!

Les Tuques are filled with the energy, color and playful  spirit of Christmas. They move our story along with  high-energy urban dance, until we find out that they  are actually Santa’s elves!

Ava is a spoiled starlet, always used to getting her  own way. She shows no gratitude for all the attention  and gifts she receives. However, when she decides  to share a gift with Isabella, she’s overcome with  the Christmas spirit and soars above the stage!

from Clement Clarke Moore’s “A Visit from Saint Nicolas.”

An aerial performance about the poetic beauty  of snow, inspired by:

“ As leaves that before the wild hurricane fly,  when they meet with an obstacle, mount to  the sky’’

The high-energy and hilarious Acro Table act was  inspired by this well-known passage:

“ The children were nestled all snug in their  beds, while visions of sugar-plums danced  in their heads’’

Like all children on Christmas Eve, their anticipation for  Santa’s arrival keeps them up as they perform a high  energy and hilarious acrobatic act, making a ruckus on  and off their bed, when suddenly, they’re interrupted by  the sound of reindeer hooves on the roof which sends  them straight back under the covers!

This act, in which a spoiled starlet named Ava discards  her toys, finds its roots in this part of the poem:

WINTER WONDERLAND “When what to my wondering eyes did appear!”

In our show, there is a magical light that transforms  our world into the scenes of a bright winter day.

“ Away to the window I flew like a flash, tore open  the shutters and threw up the sash!”

In this Winter Wonderland, a young couple skates on  a frozen lake. Isabella watches as their increasing  virtuosity and daring prove their trust in one another…  and their love.

“ And laying her finger aside of her nose, and giving  a nod, up the chimney she rose;”

Into twilight’s darkening sky, a twinkling silhouette rises  from the earth. This mystical figure reminds Isabella of  the present her father gave her and of her love of home.

Father and daughter re-united at last, he offers Isabella  her Christmas gift once more. This time she sees it  through very different eyes! Inspired by all she has  seen on her journey, Isabella rediscovers the light of  the Christmas spirit, embracing her gift in an act of  joy and gratitude, encouraged by all those who have  guided her along the way.

“ When out on the lawn there arose such  a clatter, I sprang from my bed to see what  was the matter!!”

A mischievous kid starts a snowball fight that grows and  grows and OVERFLOWS into the audience!

Another act inspired by the description of Santa Claus  in the poem:

“ His eyes – how they twinkled! His dimples how  merry! His cheeks were like roses, his nose  like a cherry!’’

On a frosty winter night, four young boys appear  in their sparkling puffy coats. They pass the Christmas  spark between them with their glowing diabolos.  Two audience members are brought up onstage  to join the fun!

Alone in the moonlight, disheartened by his inability  to find his daughter, Isabella’s father regains faith  through the spirit of the poem expressed here:

“ The moon on the breast of the new-fallen snow,  gave a lustre of midday to objects below’’

Reunited at last, Isabella’s father once again opens  the book. Together, they read the lines that introduce  Santa’s reindeer…. our hoop divers, whose playful  energy seems to leap straight from the concluding  section of the poem:

“ More rapid than eagles his coursers they came,  and he whistled, and shouted, and called them  by name; Now Dasher! Now Dancer! Now Prancer  and Vixen! On Comet! On Cupid! On Donner!  and Blitzen!’’

Santa’s team of reindeer literally jump through hoops  to celebrate the reunion of Isabella and her dad. Each  one shows off his ability to fly through the air when  their name is called. Everyone is welcome at these  ‘reindeer games’!

With Jolly revealed as Santa Claus, the cast gathers  to wish everyone:

“Merry Christmas to all, and to all a good night!”

Cirque Twas the Night Before at Texas Trust CU Theater