In February, you never know what the weather will be like.  You could have ice on the roads, or a beautiful, sunny day!  Thankfully, the latter was the case for us during our visit to Bastrop State Park!  We were celebrating my son’s 18th birthday, and offered him a getaway anywhere he wanted to go, and of course he chose Bastrop SP!  Too cold for a tent, we reserved the big cabin at the park, No. 12, to house all the family he had coming down for his weekend-long party! 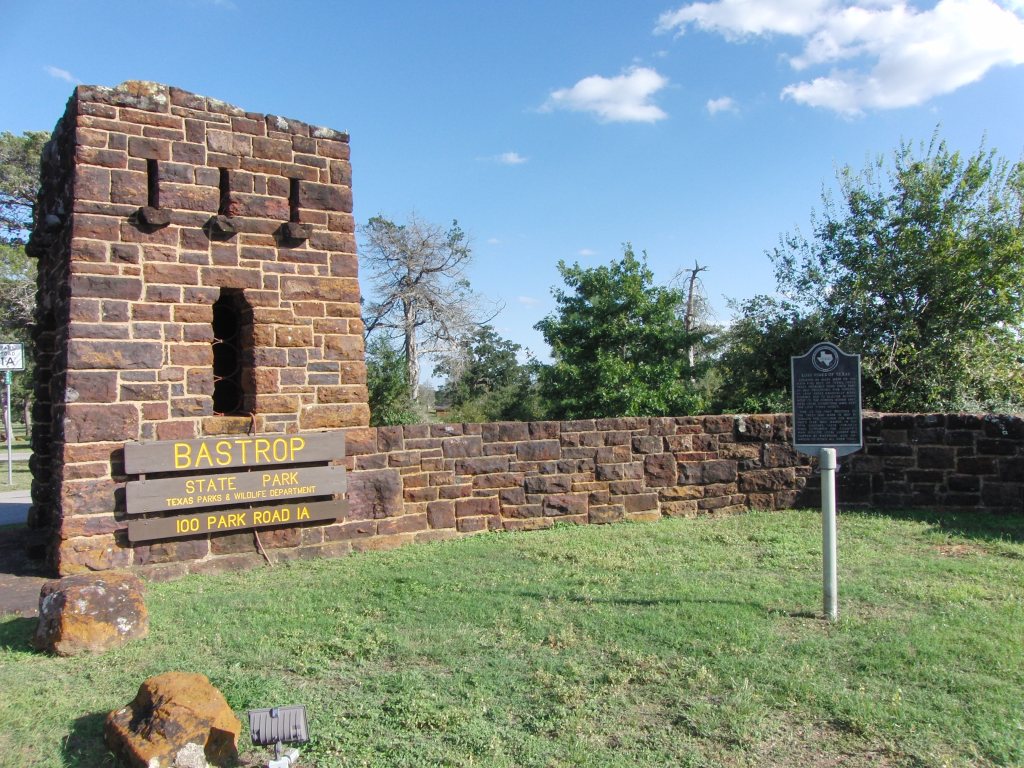 We arrived after dark to the state park, and while the office was closed, the park host were out front to give us our keys and direct us to our cabin.  They also told us that our cabin was once a favorite of President Johnson, who was of course from the area, and enjoyed coming here to have poker games at the big table!

Now, I haven’t had that confirmed, but as soon as we saw this room, it wasn’t hard to believe that LBJ would have loved this place!

The cabin was built by the CCC in the 1930’s, and it’s a perfect, rustic cabin for a celebration!  Just off-camera from this picture is a big fireplace which we kept lit almost the entire time we were there in early February!  The cabin does have heating and air conditioning, as well as windows and doors that open up to allow a great cross breeze on comfortable days!

When the CCC started building the cabins, the first few were built with local rocks, and are really cute!  They quickly realized how much more inexpensive they could be built using wood, and the rest are made from wood.

My son brought several different card games and they immediately set up the games and started playing!

The functional kitchen is set just off the big room, and has an oven, cook-top, frig and microwave.  Plates and cooking supplies are not provided, so I had to bring my own. We quickly unloaded 3 days worth of food and drinks, and the little kitchen was soon pumping out some yummy smells!

The bedrooms are simple, but clean and comfortable.  Two of the bedrooms have full size beds, and 2 have a set of twins.

To access the four bedrooms, you must go out to the big screened in patio! There are 2 bedrooms on each side, and 2 separate bathrooms. I loved this big area, where I bundled up and sat late into the night on our first evening there watching a movie on Netflix. The cabin doesn’t have television, but we did have wifi the entire time.

The cabin sits in the very back of the camping area, with no traffic from passing cars.  We were so far back that we couldn’t even see the other cabins.  In the back of our cabin, we had an incredible view of what was once the lake, which was destroyed when the dam broke

I was up early the next morning, and headed out to see the dawn break! The sunrise was blocked by the fog and smoke from the controlled fire the day before. I had known taht the park had performed a controlled burn, and was eager to see left.

Bastrop State Park sustained severe fire damage from a wildfire in 2011, and scheduled controlled burns help to limit the underbush that burns long and hot, killing many of the pine trees that could normally survive a fire.

When I came back, I broke a few eggs whipped up some sausage and egg breakfast tacos to give us a little energy boost, then we headed down to meet up for the Guided Park Hike, Out of the Ashes, which takes you through parts of the park affected by the fire of 2011. 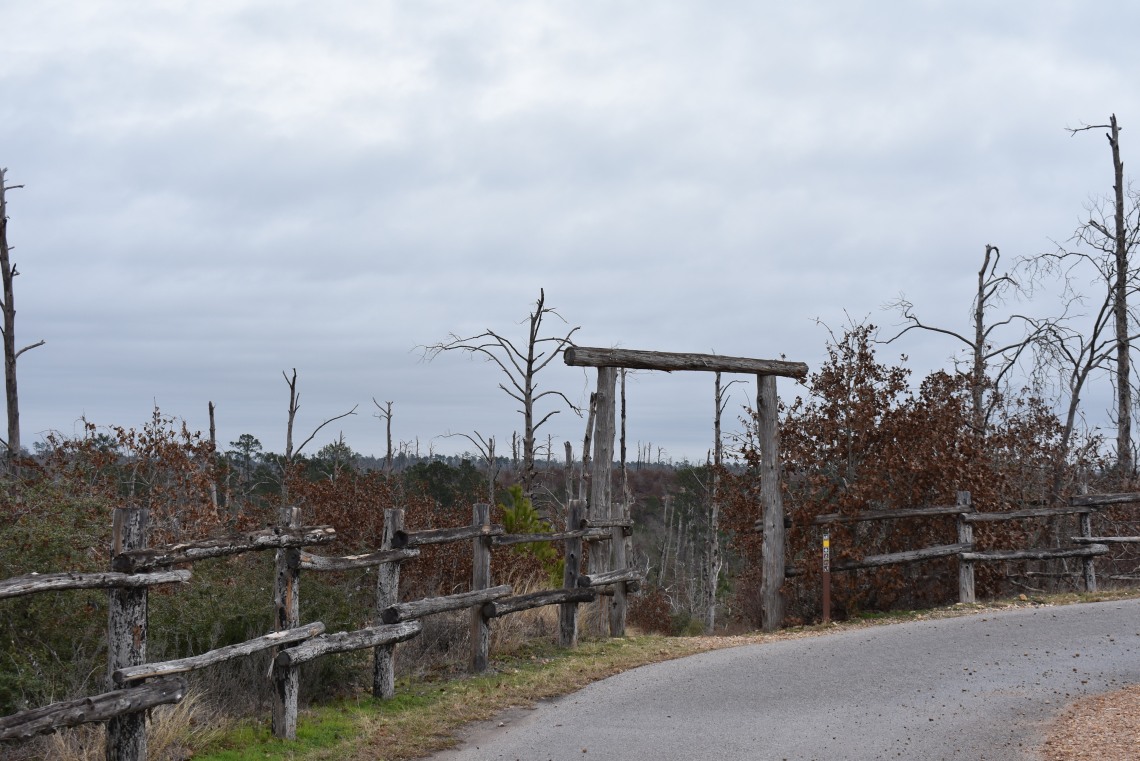 We met at the entrance to the hiking trail.  You can still see the smoke in the distance.

It was about 50 degrees, the perfect weather for hiking! 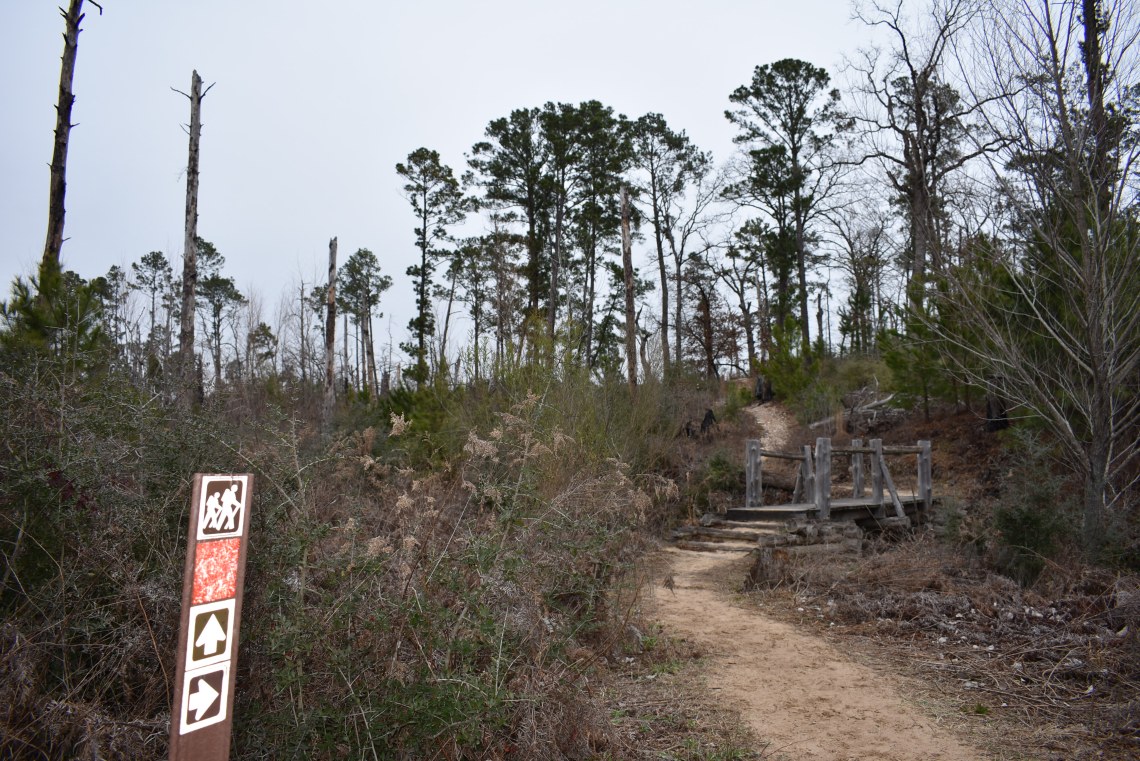 It’s a beautiful trail.  Our guide, a park docent, was very knowledgeable about the history of the park.  About half-way through, as it was getting smokier, she turned back, as she had told us she would, and we finished the hike on our own.  There were still several small fires burning just off the trail! 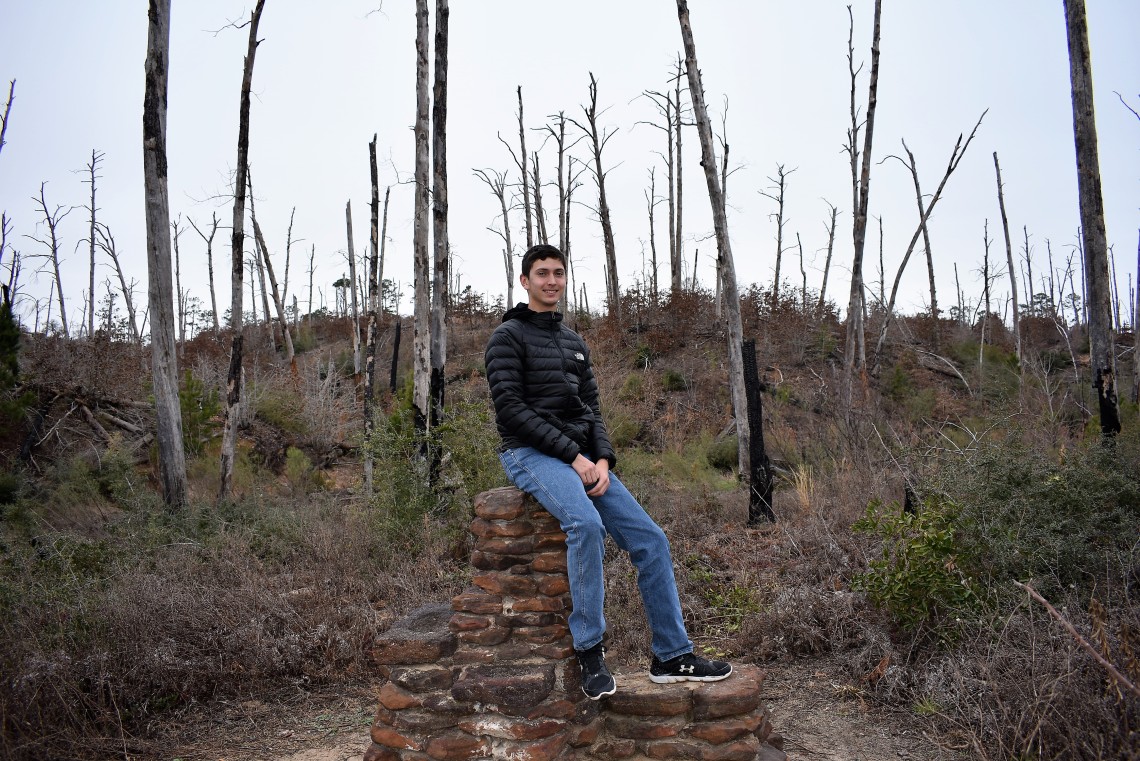 The remains of the pine trees that were destroyed during the 2011 fire stand like skeletons in the forest, however these trees do provide necessary nutrients to the soil, and a food source for insects, which then provide food for larger and larger animals.

I love this structure we came across on the trail, an old water fountain built by the CCC in the 1930’s.  The forest had grown around it and it had been lost in the underbrush until the fire of 2011 revealed it! 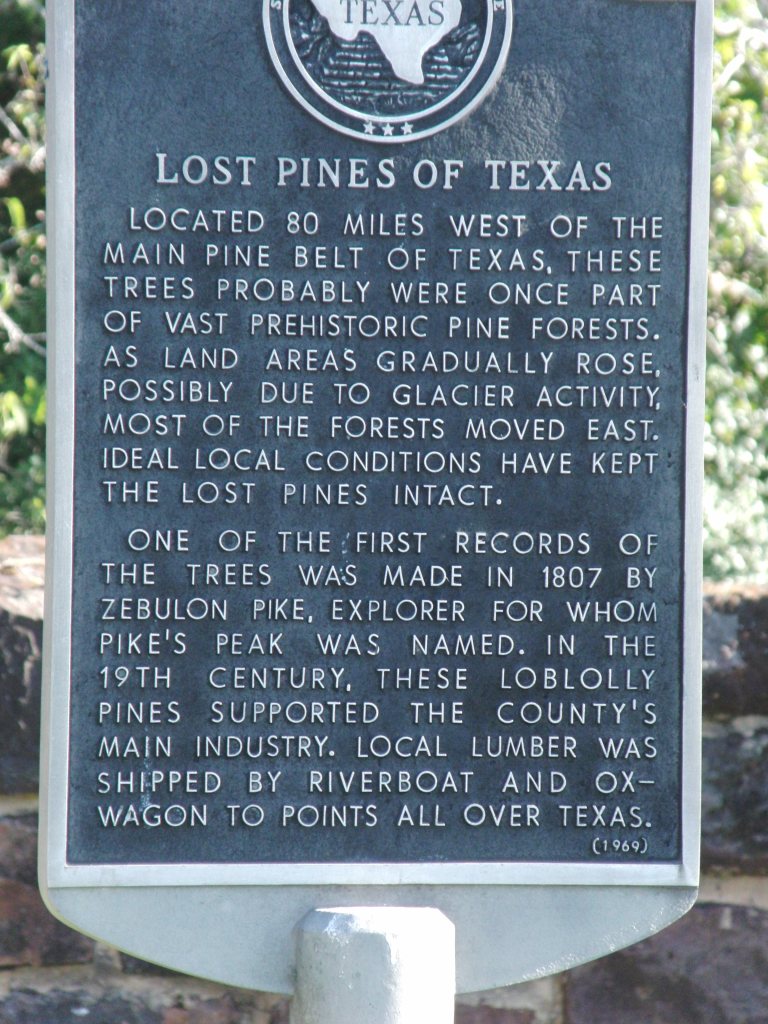 About a year after the fire, volunteers came and planted thousands of small loblolly pines in the park, which are now about 15′ tall.

I snapped this picture of the playground after our hike. 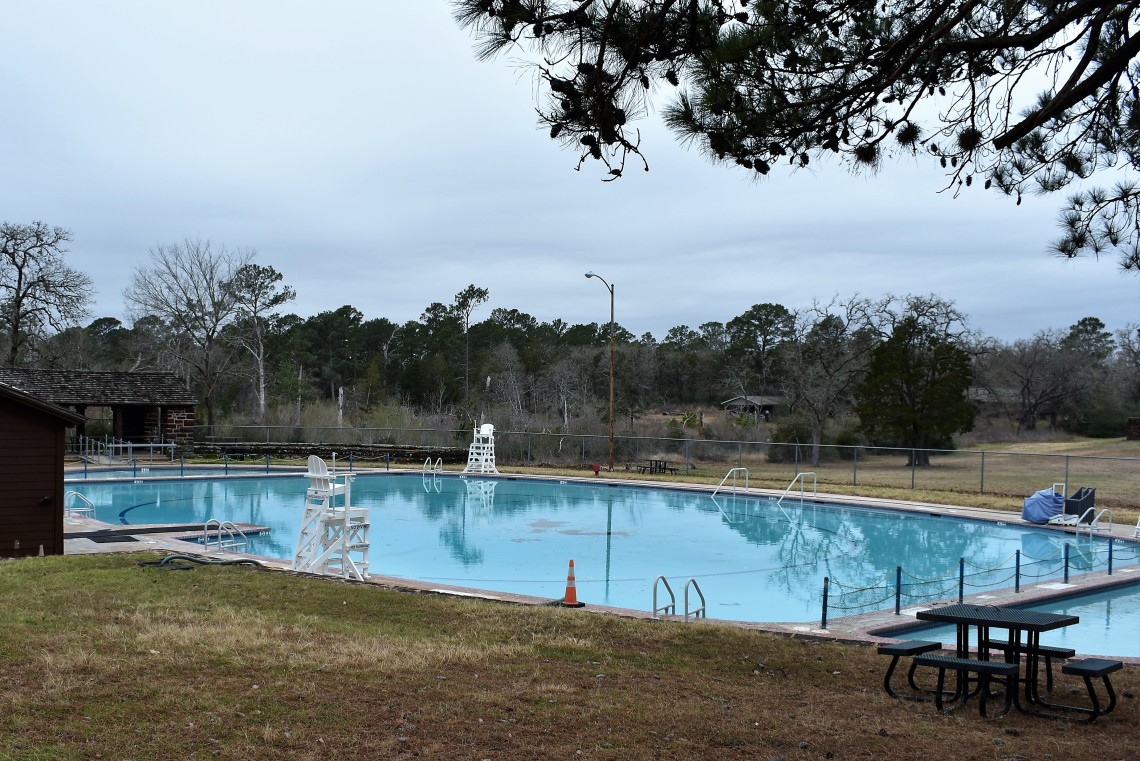 The swimming pool is open May – September, and is only $3/person with a paid park admission.

After the hike, we headed up to the Scenic Overlook.  The Scenic Overlook Trail, which leads to the original CCC hike-in picnic area, was closed during our visit due to the controlled burn, but is my favorite hike, especially in the fall, when the area is covered in little yellow flowers!  At under 2 miles, it’s a strenuous little hike up to the top!

The Scenic Overlook is a beautiful spot to spot and enjoy the views. 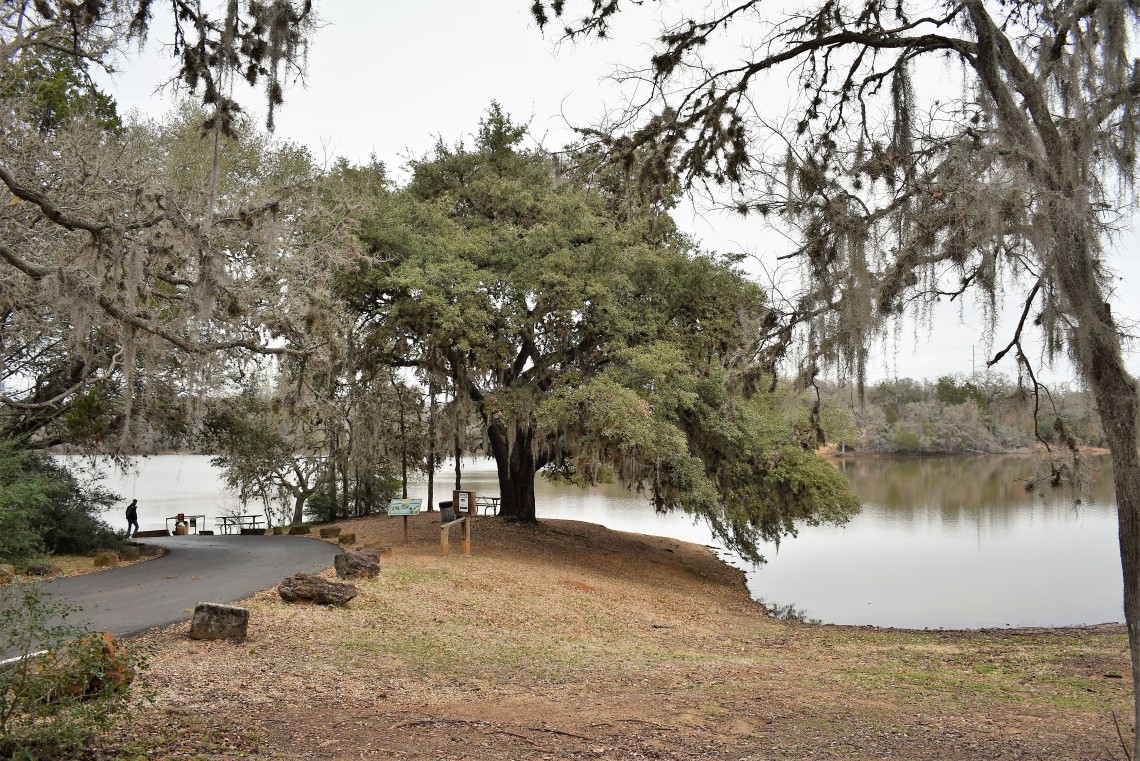 Buescher State Park sits about 12 miles away from Bastrop State Park down Park Rd. 1C.  It’s a beautiful, curvy little road frequented by road cyclist.  At 35 mph, it’s lovely but not if you’re in a hurry.  You can rent kayaks to take out on the little lake at the park store.

We jumped on the highway, and headed into the town of Bastrop to grab some hamburger meat for the chili I was cooking for dinner that evening.  I love the big HEB in Bastrop, and did a little sight seeing in scenic Downtown Bastrop and along the Colorado River before coming back. 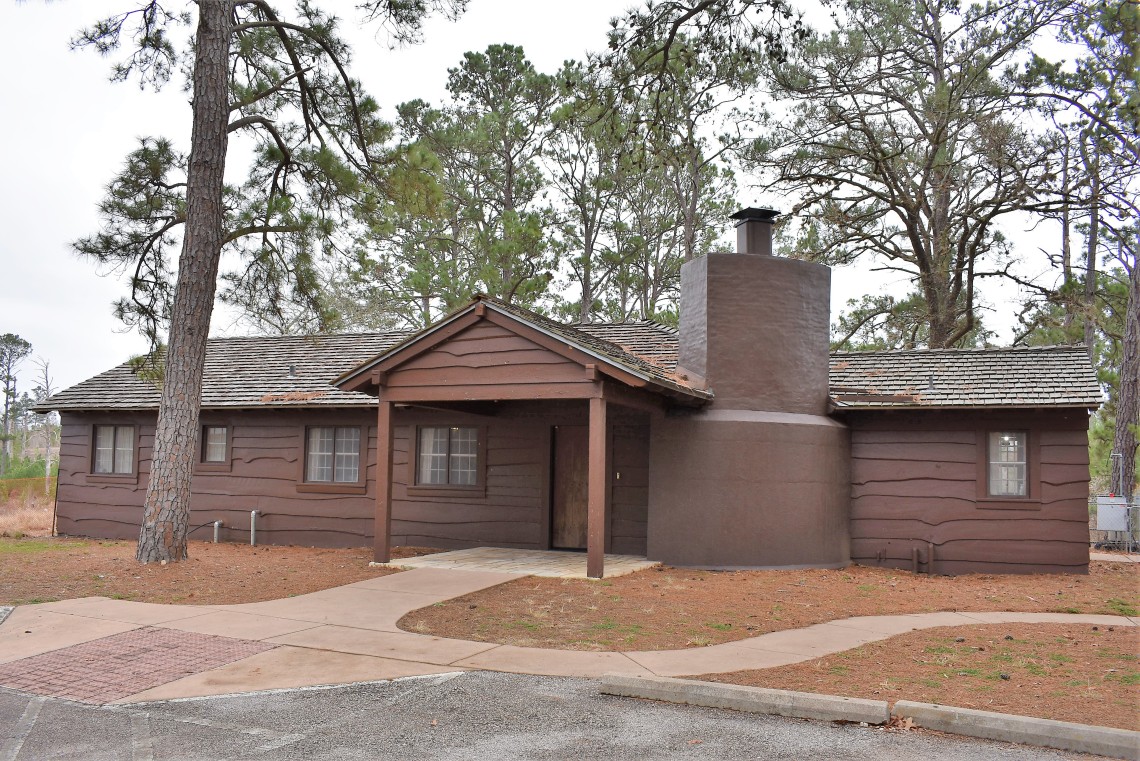 Another of the things I loved about our cabin was the big parking area out front, only for use by our cabin.  Everyone had a place to park, even though we had a lot of cars!

The back of the cabin had a picnic table, grill and fire ring!

The park sells firewood at the Park Headquarters.  You can purchase during the day or after hours.  I always purchase as soon as we arrive, since I know how quickly it can go during a busy weekend, and no one wants to drive out looking for firewood!  Be sure and pick up a fire starter.  I keep an old tarp in my car to lay the firewood on when I know we’re going to be picking some up.

We packed a hammock for mid-day naps!  It was so nice to be a place where the kids could just play outside and explore, while we were close by if they needed us!  The creek below us had a myriad of animal tracks, and we enjoyed walking down and trying to identify them all!

Once his grandparents, cousin and everyone arrived, we headed out to show them some of our favorite sights in Bastrop!  First stop was the Gas Station where the original Chain Saw Massacre was filmed!  I’ve never seen the movie, but I love this place, and their BBQ!  When we arrived, they were hosting a baby shower!  Thankfully, the ladies were happy to let us crash their party and show everyone around!  Click HERE to read about our fun weekend here last October!

Then we headed back to Downtown Bastrop for a quick drive by, and of course to Buc-EE’s, where we had to get some beaver nuggets and pork rinds!

We arrived as the sun was going down.  After a big chili dinner, we played cards and dominoes while the kids built a big fire outside and roasted marshmallows for smores!  We did forget to bring the big forks, and the kids had to find sticks to use, which was fun, and a little funny as some of the sticks burned faster than the marshmallows!

We all sat around the fire and watched the big moon and star-covered sky!

I’ve gotten to the point that I don’t enjoy cooking breakfast at home, but I love cooking for a big group, especially one that will help me clean up when it’s over!  Sunday morning we enjoyed breakfast with everyone, and a nice walk through the woods!  Checkout is at 11am, so soon we were packing up for the drive home.

The kids all wanted to kayak the river, so once we were out of the park we headed back to Downtown Bastrop, to the Bastrop River Company.  Here we met Matt, who was great at helping us get kayaks and paddleboards, and get down on the river!  The kids had a great time paddling down river, stopping to swim (yes, they were swimming in February) and skip a few rocks, before heading back.

My husband and I watched from Neighbors Bar and Grill, which overlooks the river, and shared a bloody mary while the kids played in the water below us!  It was an almost perfect, sunny February day!

As much as I love Bastrop State Park all year long, nothing compares to fall in the park, when it’s covered in little yellow flowers.

Dogs are allowed in the state park, but not in the cabins.

Things To Do in Bastrop

Play
HERO Water Sports is a big inflatable water park on Lake Bastrop, click HERE to visit their website.
One of our favorite places to take out of town friends is the Gas Station from the original movie, Texas Chainsaw Massacre! Click HERE to read more!
Barton Hill Farms Fall Festival and Corn Maze is an annual event each October, not to be missed! Click HERE to read more.
Eat
Neighbors Kitchen and Yard, overlooking the Colorado River, is quickly becoming one of my favorite restaurants, with a huge deck and big, open yard and live music on the weekends. Click HERE to visit their website.

For more fun things to do in Bastrop, check out 365Bastrop.com and VisitBastrop.com.