During our week long visit to New Orleans, my family’s top Must-Do activity was a tour of Honey Island Swamp, “famous” for the Honey Island Swamp Monster!  I did my research on tour companies, knowing that I wanted a good company with local guides, and found Pearl River Eco-Tours was exactly what I was looking for!  We loved our tour!

I didn’t make my reservation until the week of the trip, because in late November I knew our only chance of seeing an alligator was on a warm and sunny day.  We picked a noon tour time, again to make sure it was warm enough that we might see an alligator!

Directions to Pearl River Eco-Tours were easy to follow, and about 35 minutes from Downtown New Orleans.  We had our car, but they also offer transportation.  I’d really suggest renting a car because there is SO much to see!

The office is right on a little tributary of the river, and they said alligators will come right up to sun on the warm boat ramp and grass! 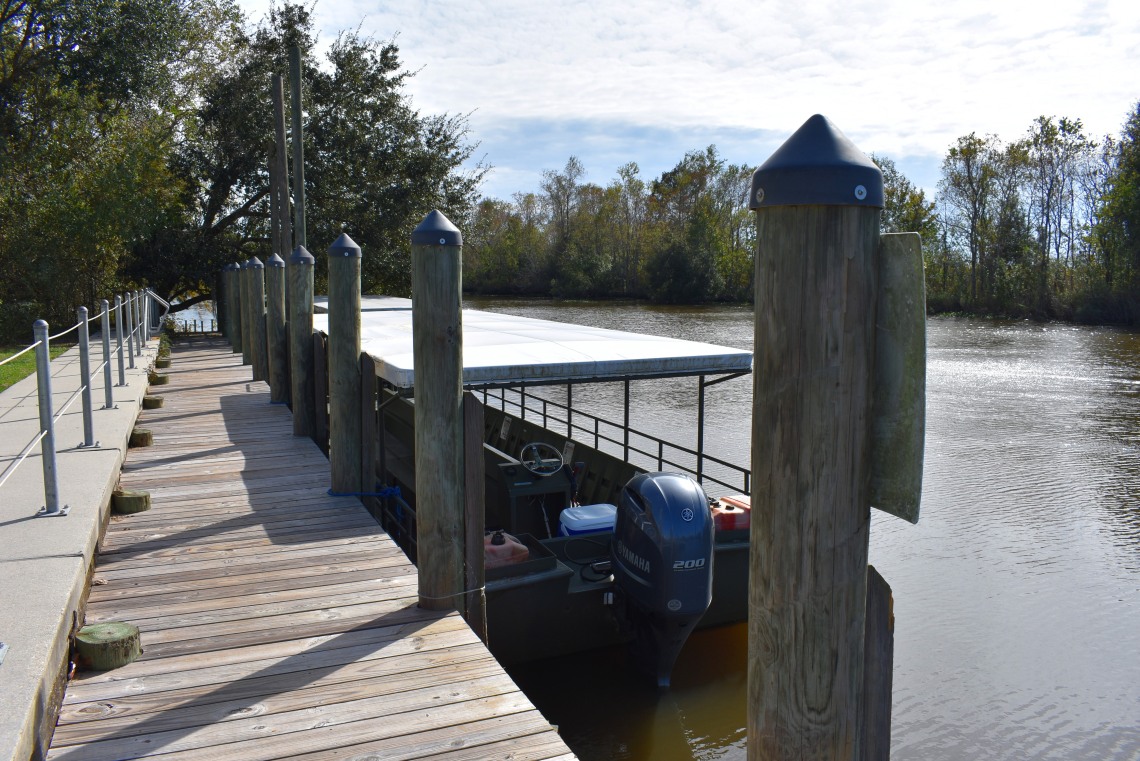 I loved that our boat was covered, even though the sun felt great on a cool day!

While they don’t make any promises of seeing the Swamp Monster, and in fact say they have never seen him, Captain John said everyone who lives out there believes in him, and he has heard noises and seen the 3-toed prints in the mud!

Ready to see the swamp!  There were two other families on the tour with us, one from Houston and one from New Zealand!

Captain John wanted to be sure we saw an alligator to start our cruise, and we headed over to find one!  In the winter, the larger alligators go down into the mud to keep warm and conserve energy, but smaller alligators need to lay out and warm up. 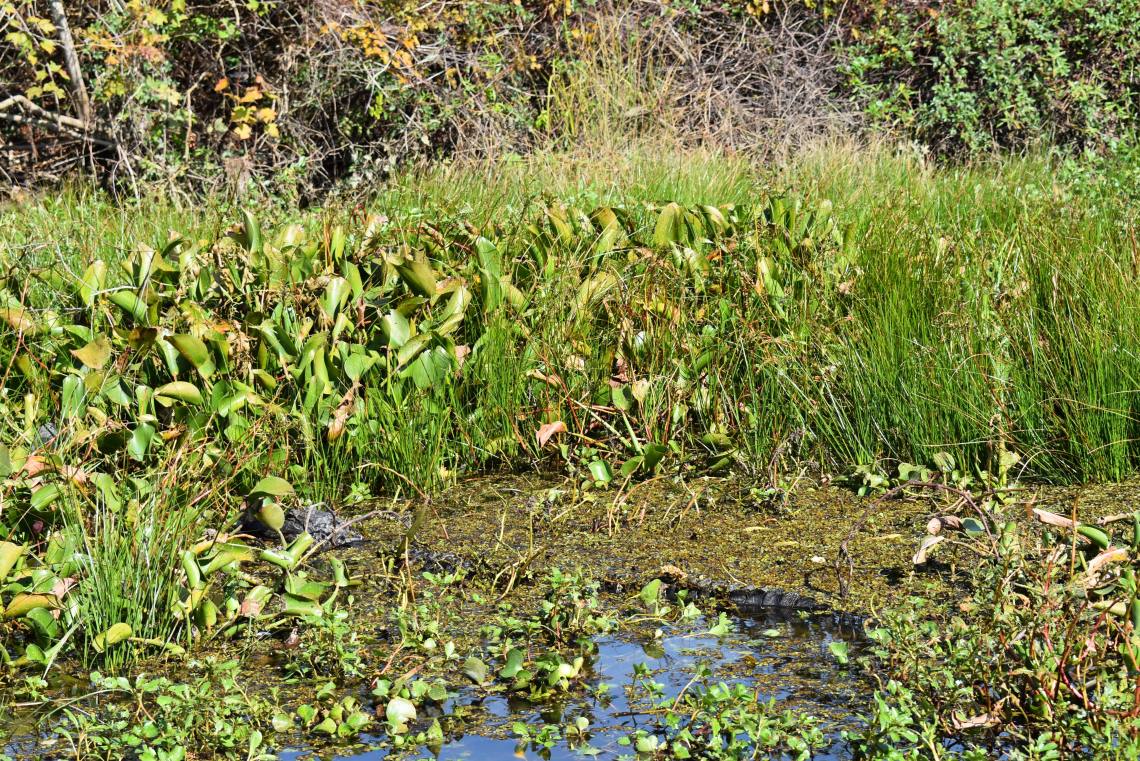 We spotted our first alligator in minutes, sunning in some weeds!

Another alligator was laying on an old upturned canoe!  Captain John didn’t want to get too close and disturb him.  This was taken with no zoom, to show how close we actually were! 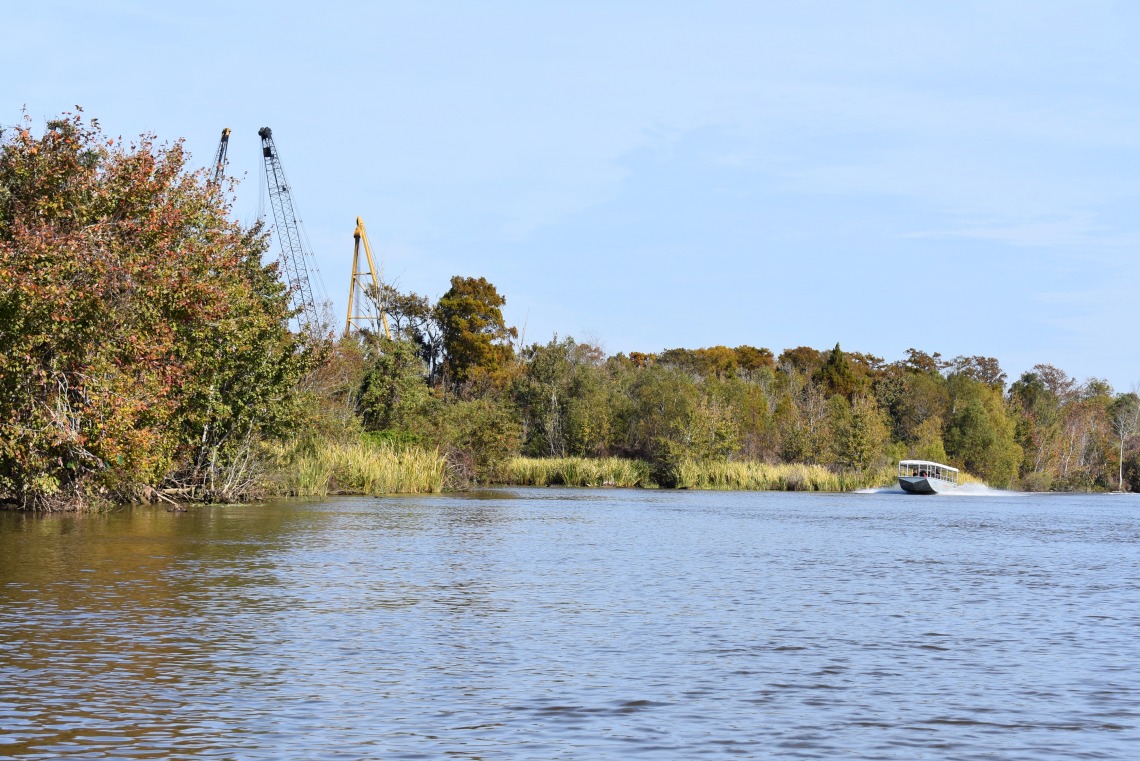 Then we headed out onto the main river!  The Pearl River begins in Mississippi and runs down to the Gulf of Mexico just 6 miles from Eco Tours headquarters!  Coming out onto the river, it’s a confluence of two worlds; a treeless marsh to the south and old-growth hardwoods to the north.  We turned north and headed upstream! 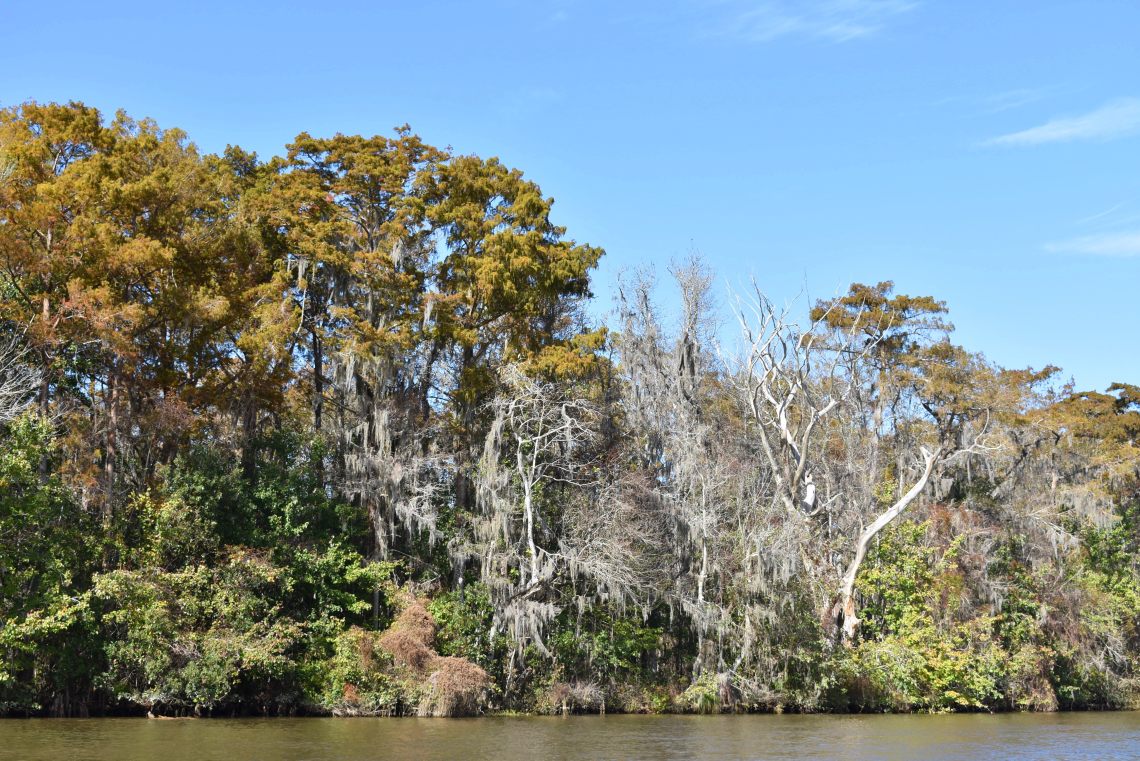 We stopped several times to talk about the plants and animals along the river!  The Spanish Moss growing on the trees is full of Southern imagery and folklore!  Not an actual moss, it’s in the bromeliad family, just like a pineapple!  It doesn’t have roots, and absorbs it’s nutrients from the air.

Spanish Moss was very important product in Louisiana and the south, where it was used as insulation in homes and as stuffing for mattresses, chairs, etc.

The Bald Cypress trees make up much of the hardwoods in the swamp.  Called a “Bald” Cypress because they are not evergreen and lose their leaves each winter, these trees establish a secure base by growing “knees” to secure them to the ground!

The wood of the cypress tree is very water resistant, and was used to build homes.  Most of the homes in New Orleans French Quarter are built with Cypress.

The tree was logged so extensively that most of the largest are now all cut down!  At 17 ft wide, The “stoutest” bald cypress in the U.S. can be found at the Cat Island National Wildlife Refuge in Baton Rouge, Louisiana.  Click HERE to visit their website.

Along this part of the Pearl River, we are only 6 miles from the Gulf of Mexico, and many of the residents along the river also make their living on the water!

Captain John turned off the river and headed into one of the narrow bayous that run all along the river.  The river was down a little over a foot, and much of the land we were seeing is normally under water.

To our delight, Captain John started calling into the woods, and we were quickly greeted by this cute little raccoon! 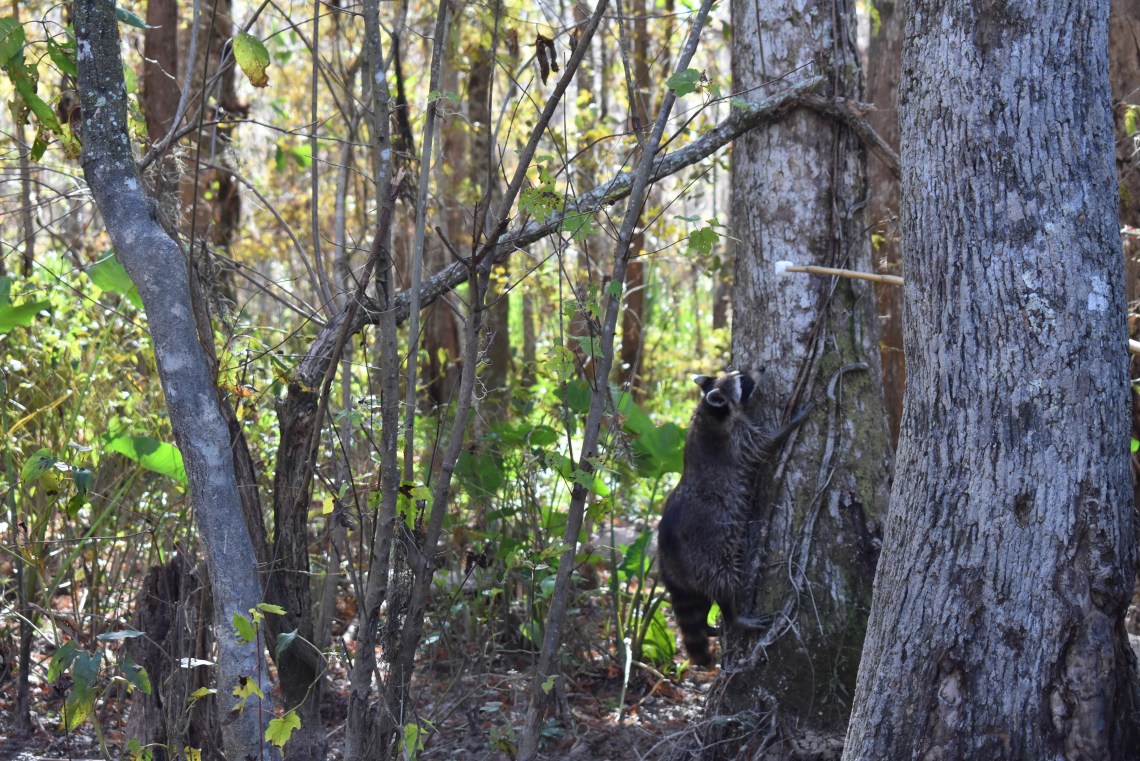 He placed a marshmallow on a long pole, and held it out the let him eat it!  We were so thrilled! 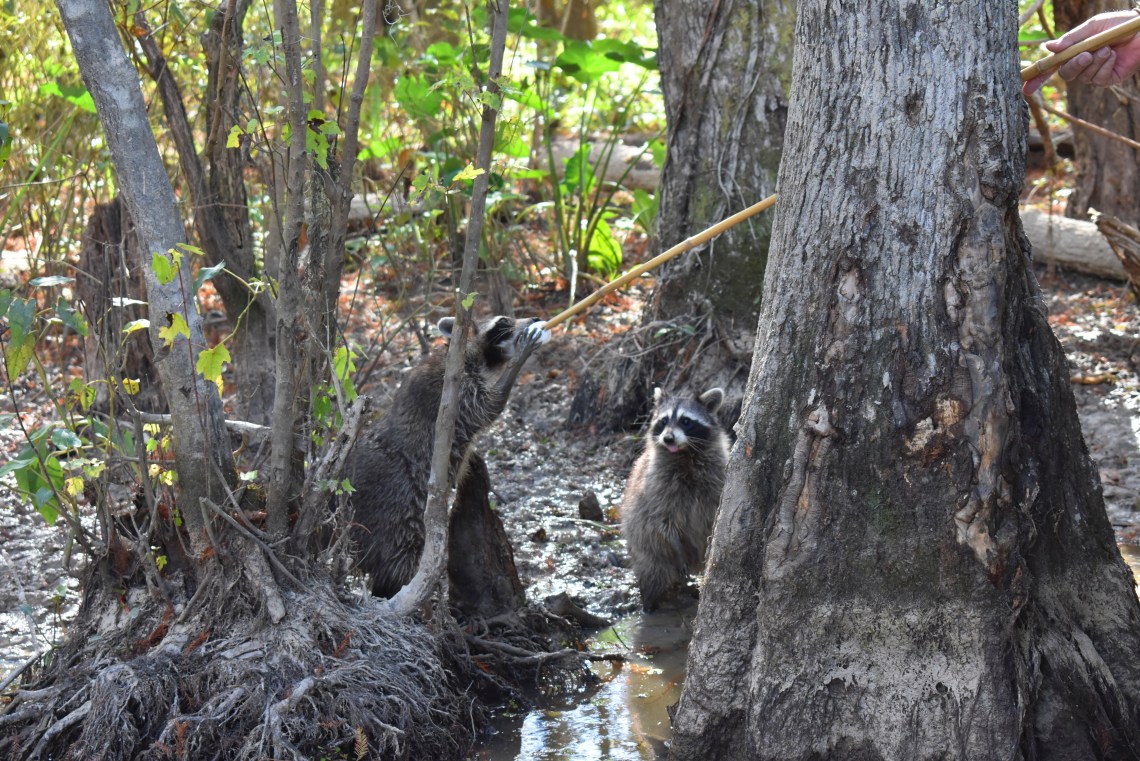 Another little guy came up and joined in for a treat! 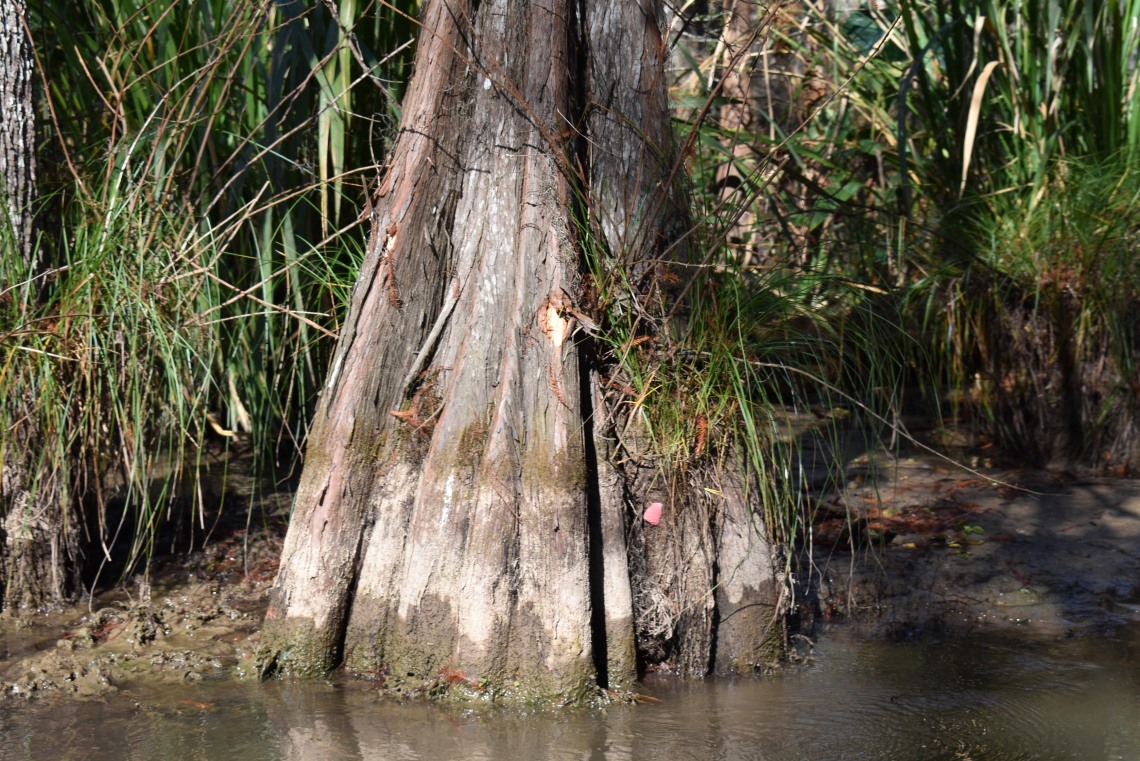 While it looks like someone stuck their pink bubblegum to the side of this tree, it’s actually the egg sack of the apple snail, an invasive snail that has recently shown up in Louisiana waterways!

The snail, which is popular in home aquariums, now threatens the rice crops in Texas and other southern states, as it’s so numerous, has a voracious appetite and loves the soft new plants!

Along the way, we also spotted this large bird!  However, the bird I was hoping to spot was a Bald Eagle!  While there aren’t any nest this year along the river, they can often be spotted in the big bald cypress, or flying out of the water searching for food!

We did spot a bald eagle a few days before on our drive from Houston to New Orleans as we passed over the Atchafalaya River Basin.  Here, where I-10 becomes an almost 20 mile long bridge, the 3rd longest in the U.S., the eagles has been nesting in this large tree each winter for over 10 years.

Not a bald eagle, but we did see an osprey, and I was just as excited to spot it!  I didn’t, however, get a picture! 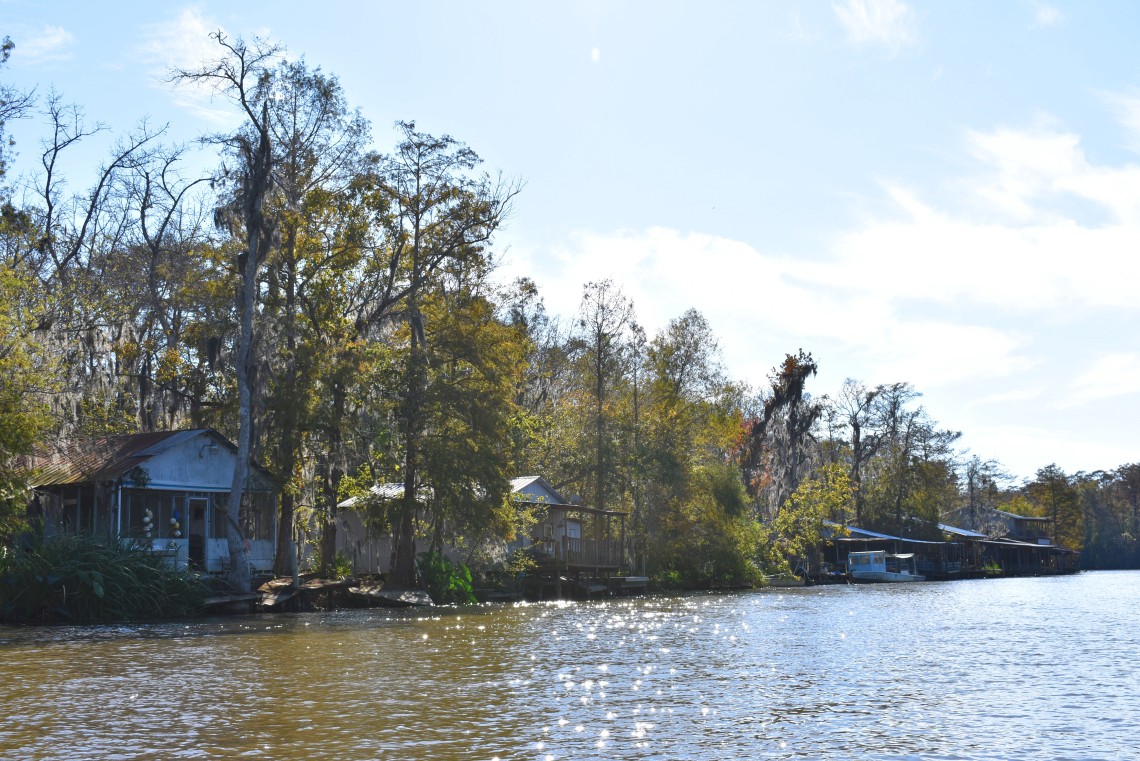 For the last few minutes of our tour, Captain John headed further upriver to a little fishing village on the river.  Here, we saw several homes clustered along the river, each with only a boat for transportation to the community boat ramp and parking area.  Captain John said each morning and afternoon boats from all over the swamp converge here as people come to meet the school bus and drop off and pick up children, no matter the weather!  It was such an incredible view into another way of life!

After our tour, Captain John recommended we head over to Cajun Mike’s in Pearl River, for some of the best authentic Cajun food!  Cajun Mike was amazing, as was his food!  He even came and sat at the table with us while we ate, offered us a few things not even on the menu, and a few samples as well, and even treated us to a little Chef Karaoke!  One thing we learned in Louisiana is EVERYONE loves to sing as much as they love to eat!

Bring a light jacket, even on warm days, just in case.

During the day, bug spray wasn’t necessary.  If you’re taking an early or late tour, then you’ll definitely need it!

Things To Do Nearby

Explore the Boque Chitto National Wildlife Refuge, where you can camp, fish, hike and just explore around the swamp!  Click HERE for more information.

We stayed in New Orleans at the Hilton Riverside, which I choose because of the great location right on the MIssissippi River and French Quarter, as well as their terrific workout facility, including indoor basketball and tennis courts, meaning my kids always had something to do!  Click HERE to read more.