We traveled to Atlanta over Thanksgiving, and had such a great time touring the Atlanta Aquarium and Stone Mountain, but my older kids and I are huge Walking Dead fans, so while we were there, we had to visit the town of Senoia, 50 miles out of Atlanta, where they film the show!  Senoia has been in countless movies, but for the Walking Dead, it is the set of Woodbury, and just behind the town is the set for Alexandria!

We had an entire day planned out, our Walking Dead Day!  Before we left Atlanta, seeing this house was a MUST!  This was Rick, Lori and Carl’s house in the Series Opener!  It was very easy to find, and the current owner just happened to be sitting out on her porch!  We stayed on the sidewalk, just to take a picture, and she was very chatty!  She said she knew the house was used in the show before she purchased it, even though she doesn’t really watch the show!  The 100 + year old home is located at 817 Cherokee Avenue, Atlanta.  Click HERE to see the listing.

It’s not on this map, but the location of Terminus is also in Atlanta.  Here’s where we got in trouble, and almost ended our Walking Dead Day!

The location of Terminus is in a working train yard, and they take trespassing VERY serious!  My husband, not so much.  After reading NOT to leave your car in the neighborhood, as it might get stolen, and a few other scary stories, more realistic than zombies. he decided to just drive inside for a quick look.  We were quickly stopped, and after a warning and a few funny stories of when they were shooting by the guard, we were escorted out!  There are cameras everywhere, so don’t even try it!  Still, it’s Terminus! 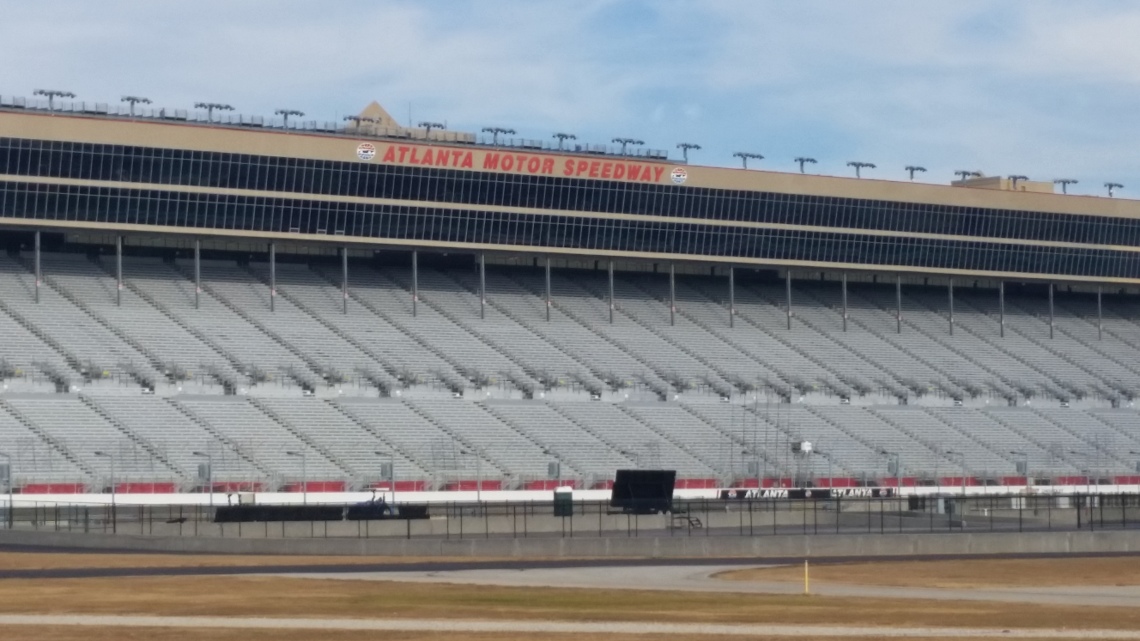 As I said, 3 of the 5 of us are HUGE fans, while my husband and youngest have never watched an episode!  So they weren’t totally bored, we made a stop at Atlanta Motor Speedway, where Smokey and the Bandit were filmed.  My husband is a huge fan of the movie, we even have a ’77 Trans Am.  There wasn’t a race going on, but click HERE for information on tours of the track!

With him a little content, we headed to Senoia, where LOTS of films have been made, including Driving Miss Daisy, Sweet Home Alabama, and Fried Green Tomatoes. 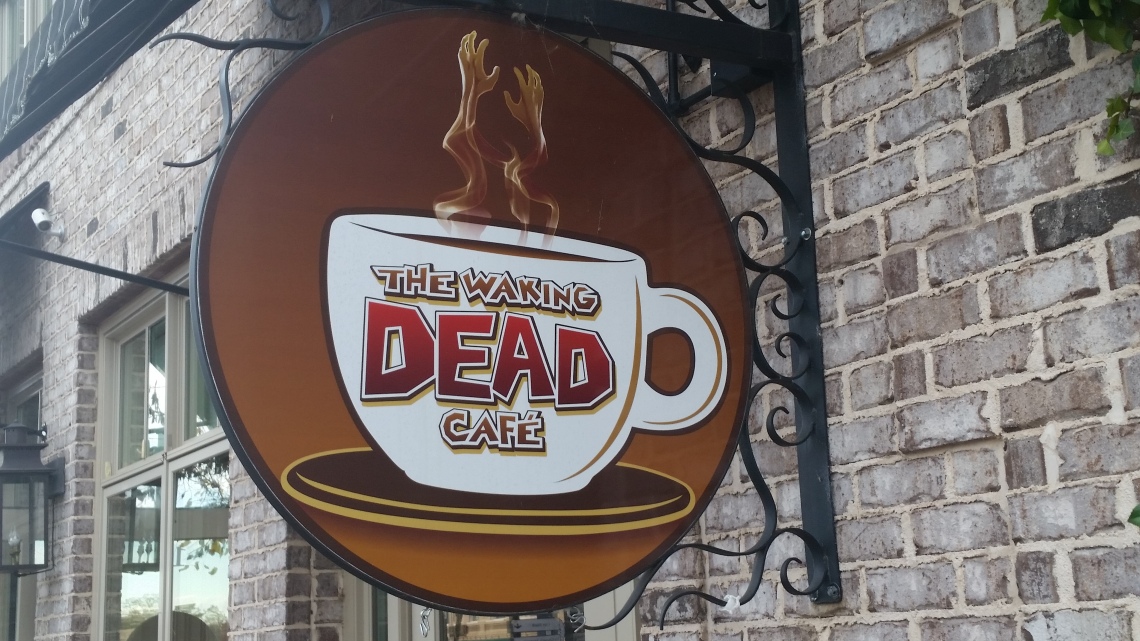 For Christmas, everyone had a stocking! 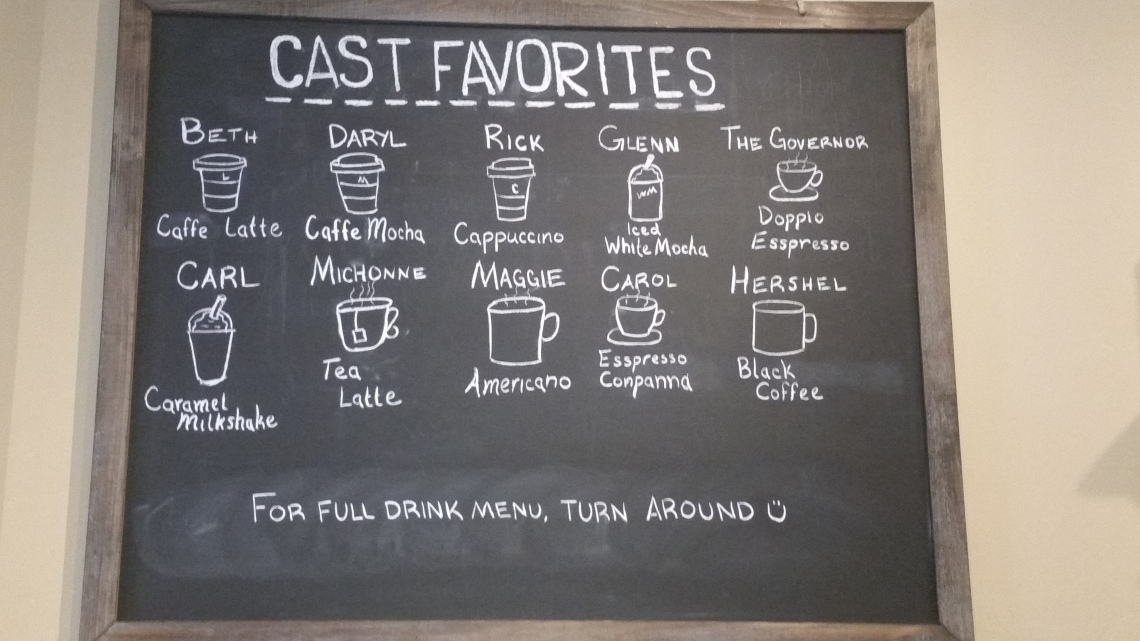 And they listed everyone’s favorite drink!

Of course, there were plenty of autographed photos of the entire cast! 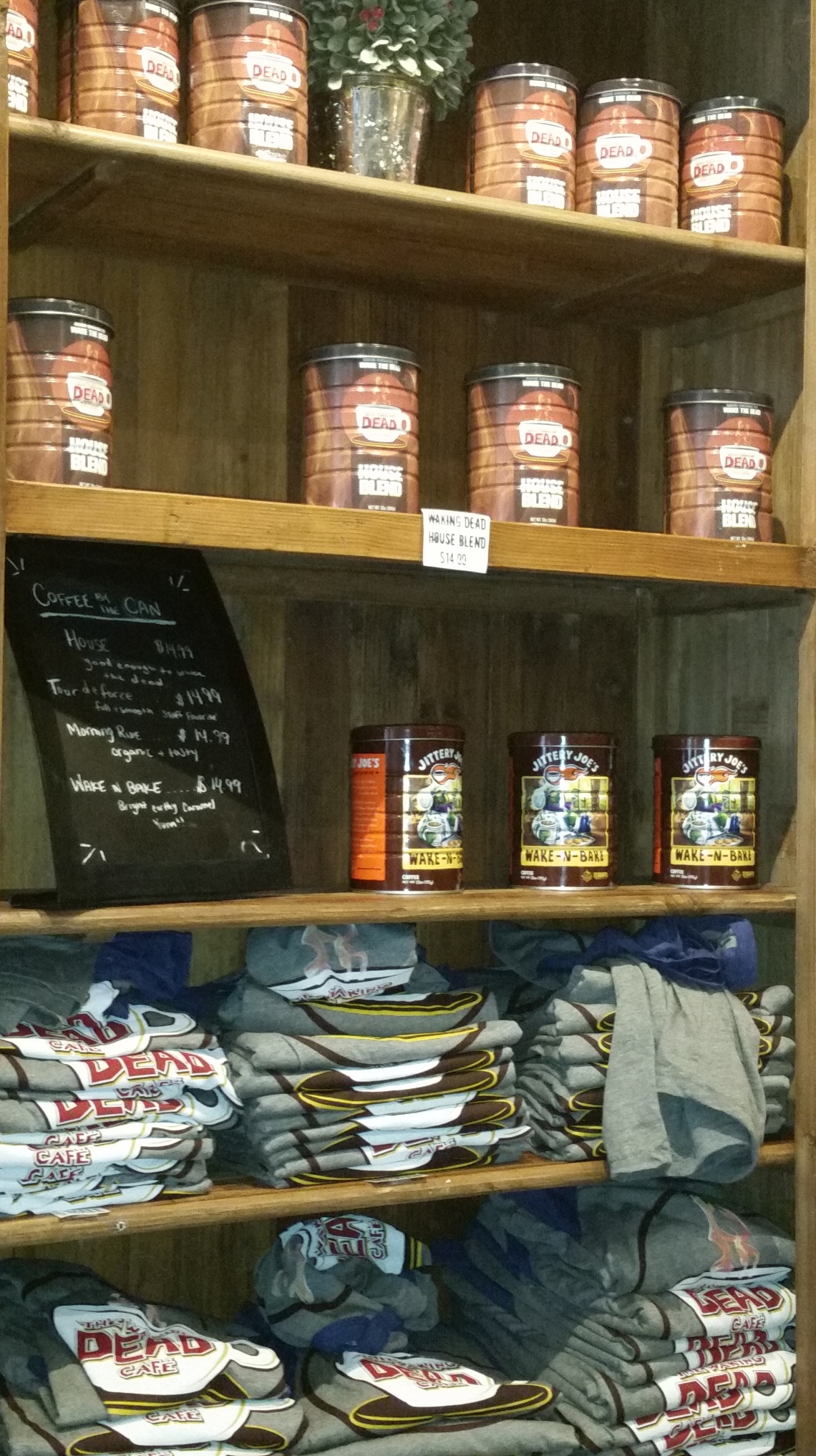 The sell Walking Dead coffee, as well as t-shirts and other merchandise.   Click HERE to visit their facebook page and see what’s new! 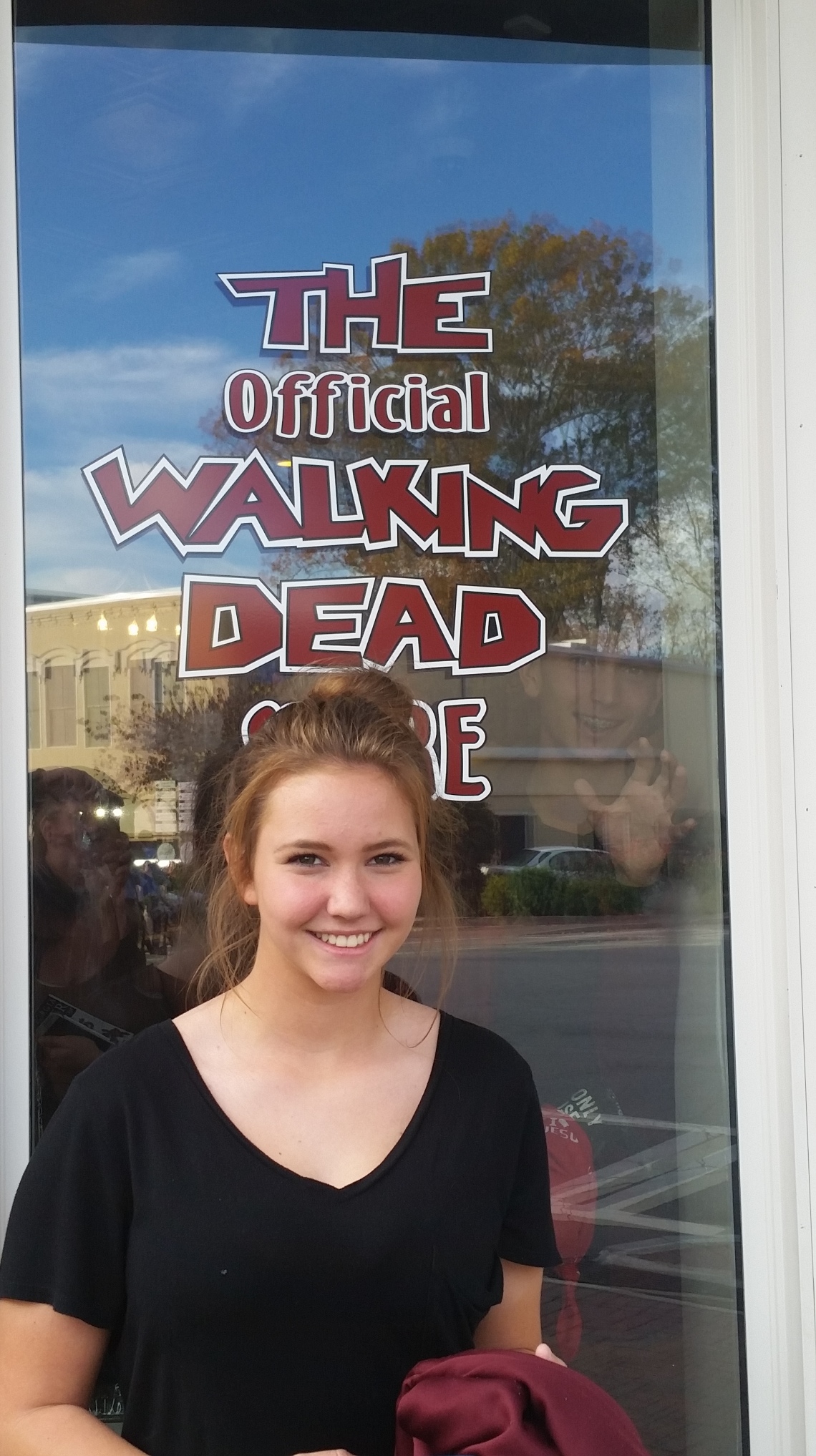 But for a HUGE selection of Walking Dead Merchandise, you have to visit the Official Walking Dead Store, the Woodbury Shoppe! 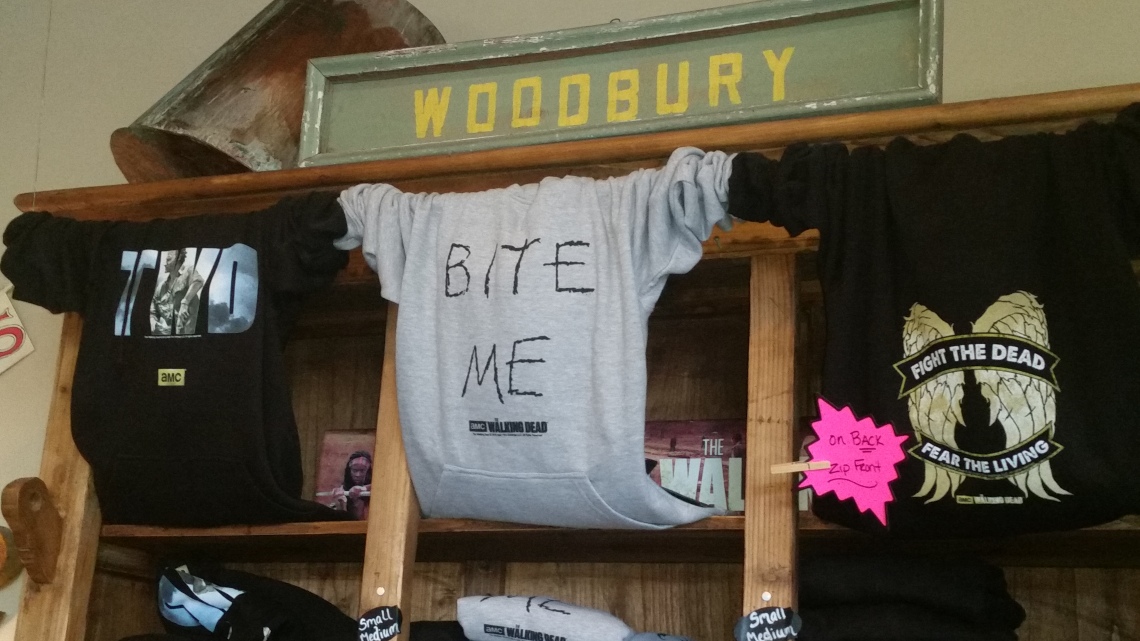 They have LOTS of great t-shirts!

And my daughter met Chandler Riggs, aka Carl Grimes!!  Okay, not really….. 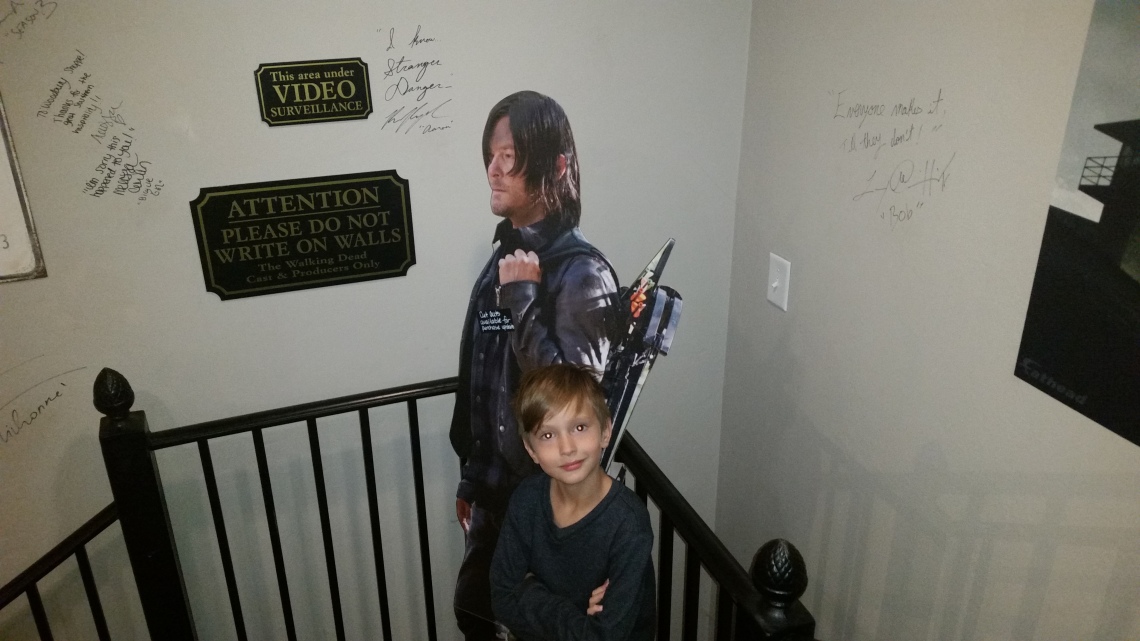 Walk down the stairs to see where the cast has signed all the walls! 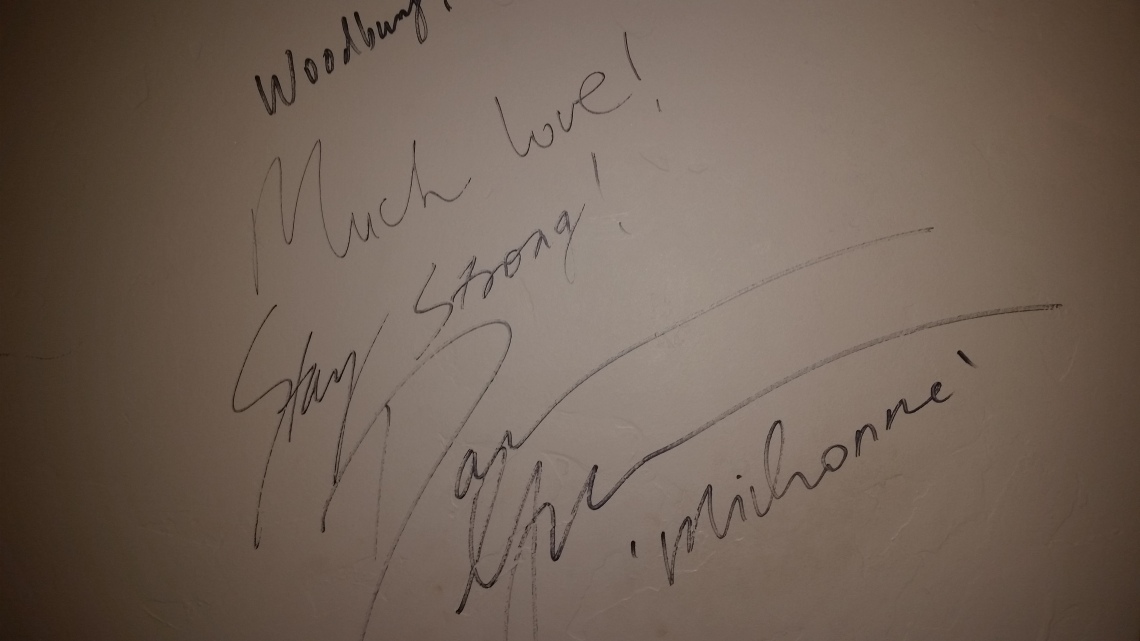 So, Michonne stood right where I was standing to sign this! 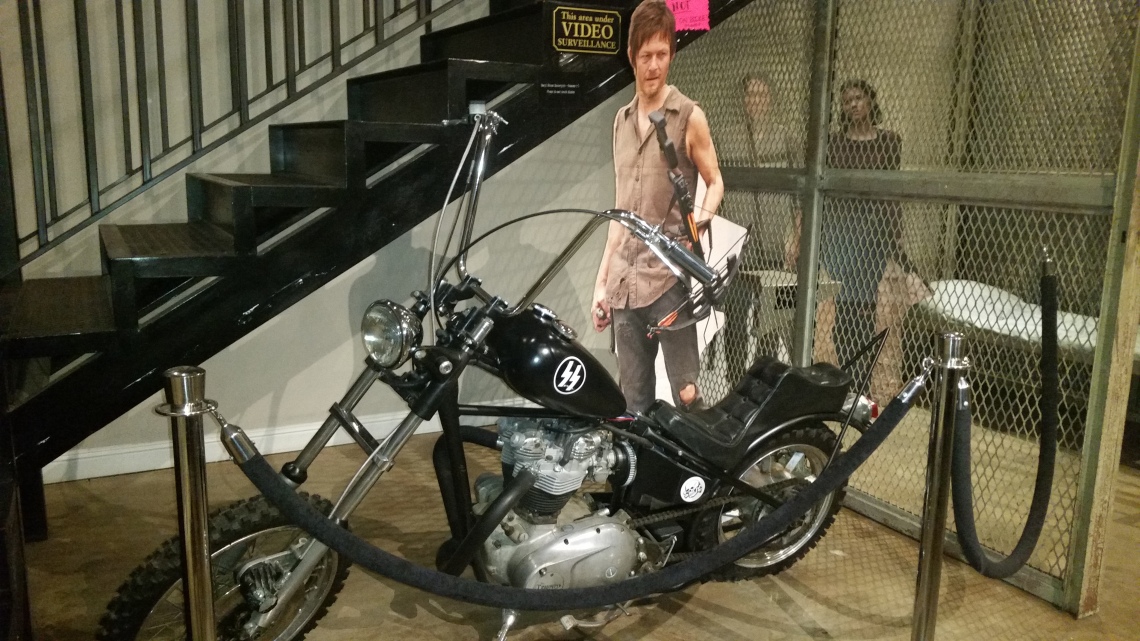 We had to explain a little of the show to my husband and kids, but they already knew all about Daryl!

At the end of town, you can just follow the railroad tracks to…… 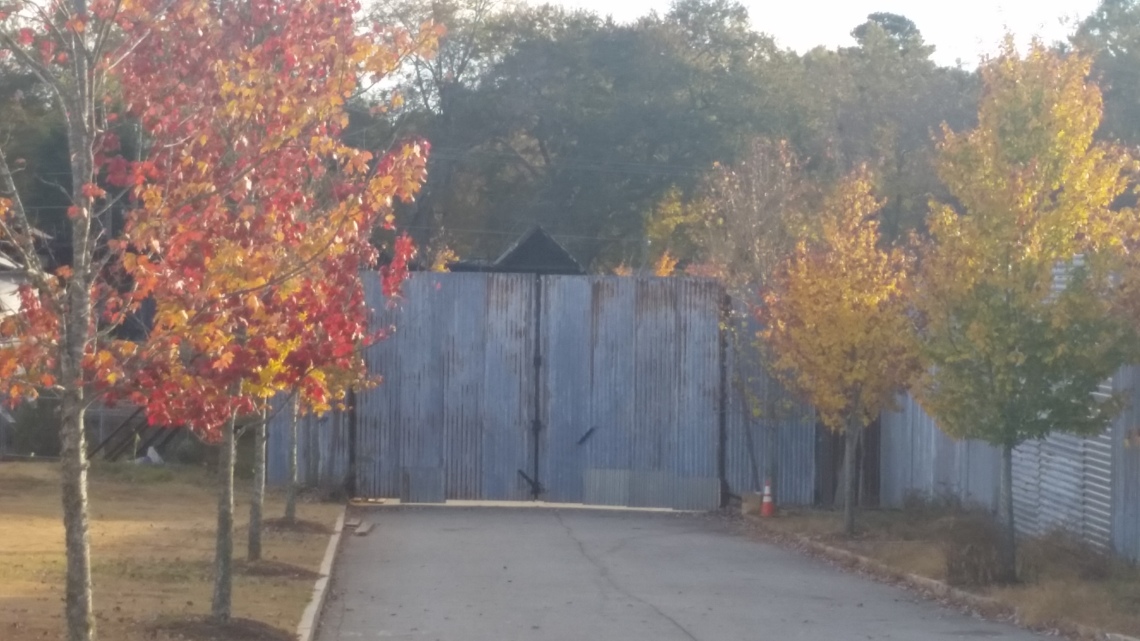 The GATES TO ALEXANDRIA!!!

But, they come with a warning!  A huge fence does encase the entire perimeter of the set, which is just what it seems, a small neighborhood!  From the road, you can see the remains of Father Gabriel’s church.  Although you can’t go inside the set, it’s still such a great treat for fans!

Even if you’ve never watched an episode, it’s a beautiful drive out to Senoia from Atlanta, and a really charming small town!

There are SO many more places to see in and around Atlanta!  For more fun Walking Dead locations, click HERE.

For bus tours of some of the locations, click HERE.

Keep Having Fun in the Texas? Sun!