Driving from Texas, you’ll start to see the signs along I-40 advertising Tucumcari miles before you reach the exit to Historic Route 66 and the town of Tucumcari, but it’s more a time portal than an exit, leading you back to the Heyday of Route 66 in Postwar America, when travelers took to the road to see the country!  Route 66 in so many ways exemplifies Americana and our adventurous spirit, and retaining as much of that history, and Tucumcari showcases as an almost living museum what life along the Mother Road was about!

The Route 66 Monument is just one of the many photo op stops in town, sitting in front of the Tucumcari Visitors Center and Museum, with a view of Tucumcari Mountain is the background.  Tucumcari Mountain, which is actually a mesa, being flat on the top, was used by Native Americans as a look out, a visual trailmarker along the highway and now as a place to put cell towers.  Look for the white T as you drive by.  Sitting on private property, we weren’t able to hike it, but click HERE for a great article and images on a hike to the summit from Route 66 News.

While there is much more to do in Tucumcari, I highlighted some of my stops in town and our experience, but leaving enough blank space for you to make your own adventure!

We stayed at the Historic Route 66 Motel, one of the bigger motorcourts in town.  A car show was in town, and the parking lot was filled with classic cars, just adding to the feel of being lost in time.

I really recommend making reservations for your stay in Tucumcari in advance, as it’s hard to get a room in town, especially during the summer travel season.

The Motorcourt was built in 1963, during the second resurgence of the Mother Road, when motorcourts were replacing the car camps and stand alone cabins that once dotted the road.  It’s been continually open and operated since then.

One of the things I loved about the hotel was the wall to ceiling windows in each room, looking out to the parking lot, a style that was popular at the time it was built.  When we arrived, we found our room to be one of the only ones without said windows, actually no windows looking out towards the parking lot, just one towards the back.  We arrived in the evening, and quickly took up with the other guest in what is considered Social time in Tucumcari, as everyone sits around the motor court with a cold drink, making new friends from strangers and telling their road stories while the kids play games of tag in the parking lot.  It was late by the time we went to sleep and only in the early morning did I bother to open our window to see the incredible view of Tucumcari Mountain it offered. 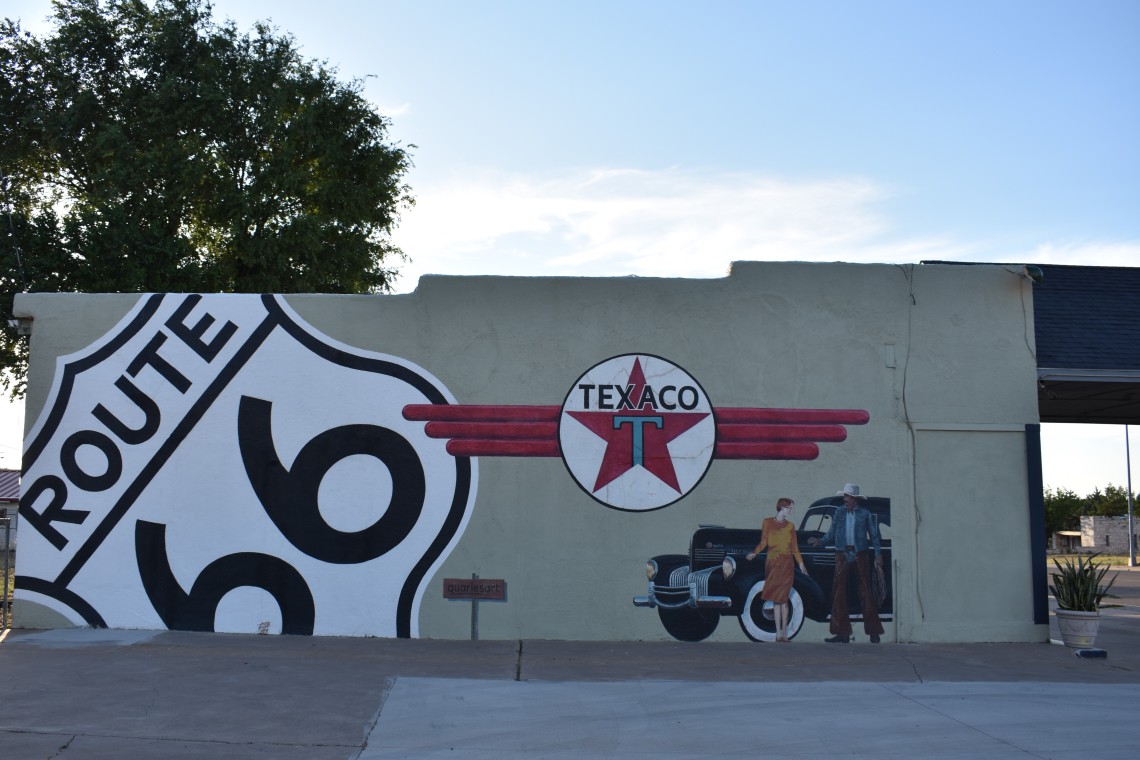 I love murals, and a couple, Sharon and Doug Quarles have painted over 50 murals in Tucumcari!  You can get a map in most of the businesses in town, and just spend a morning driving around to find most of them.  Through art, they tell the story of Tucumcari. 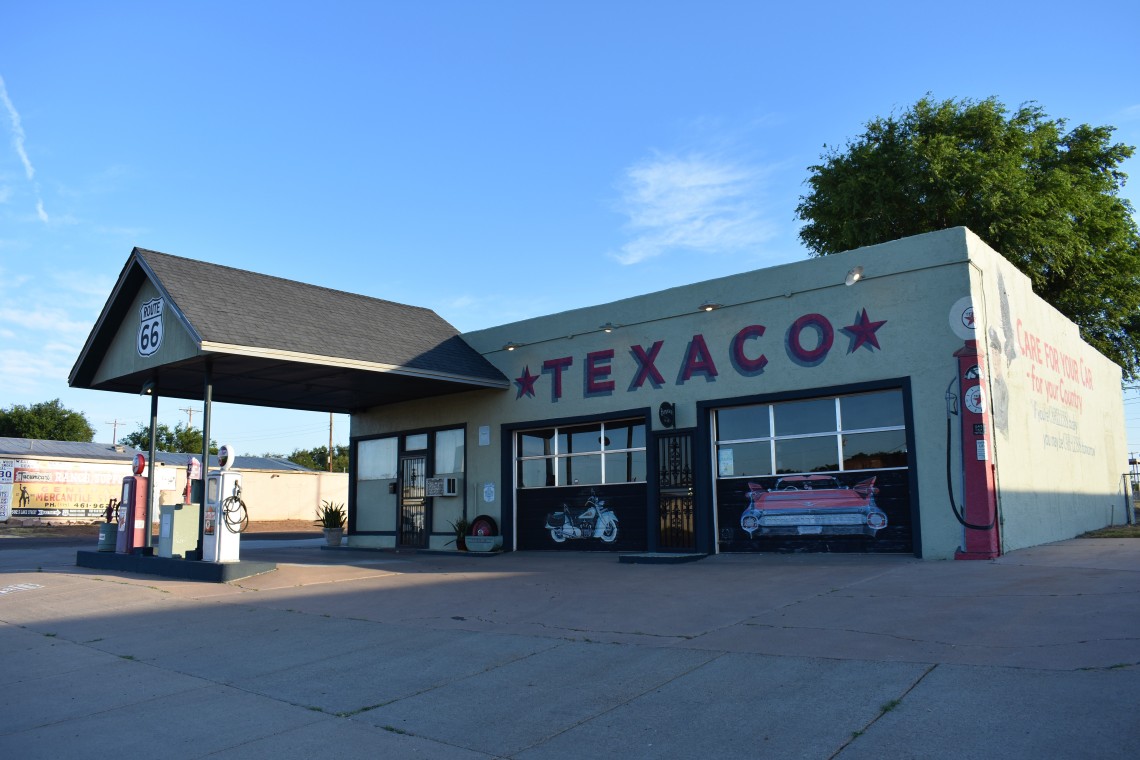 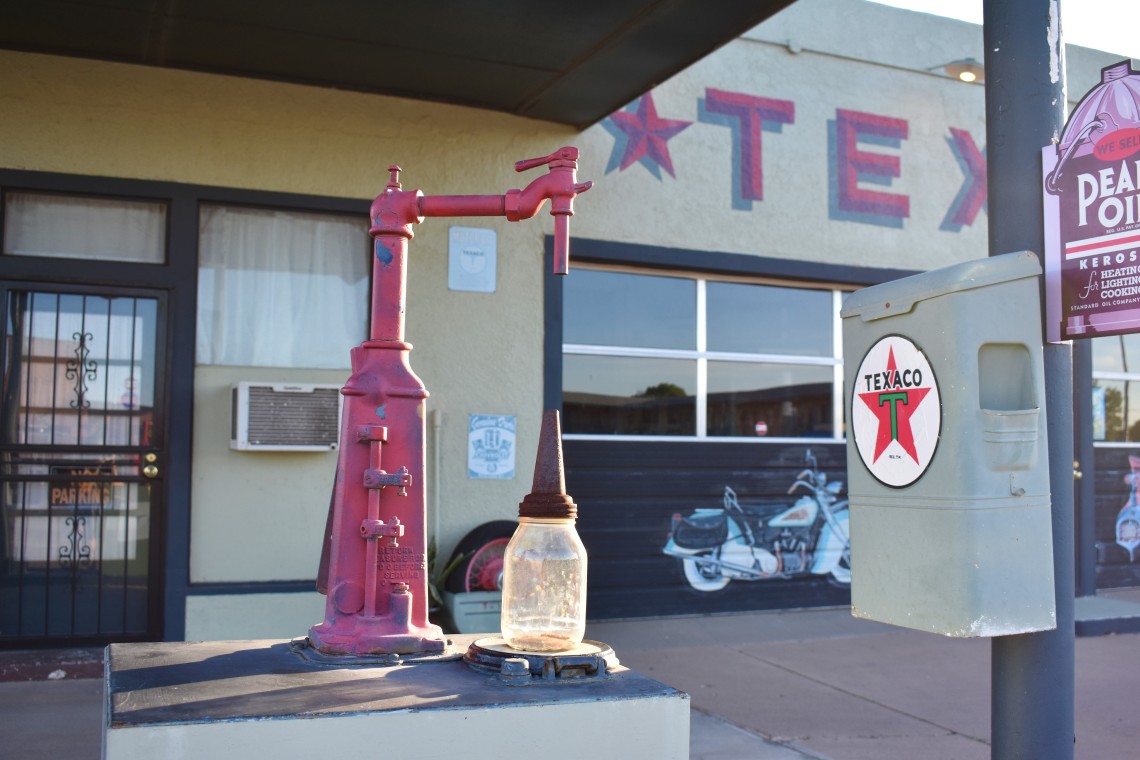 Tepee Curios was a must for us, as we are always on the hunt for souvenirs! 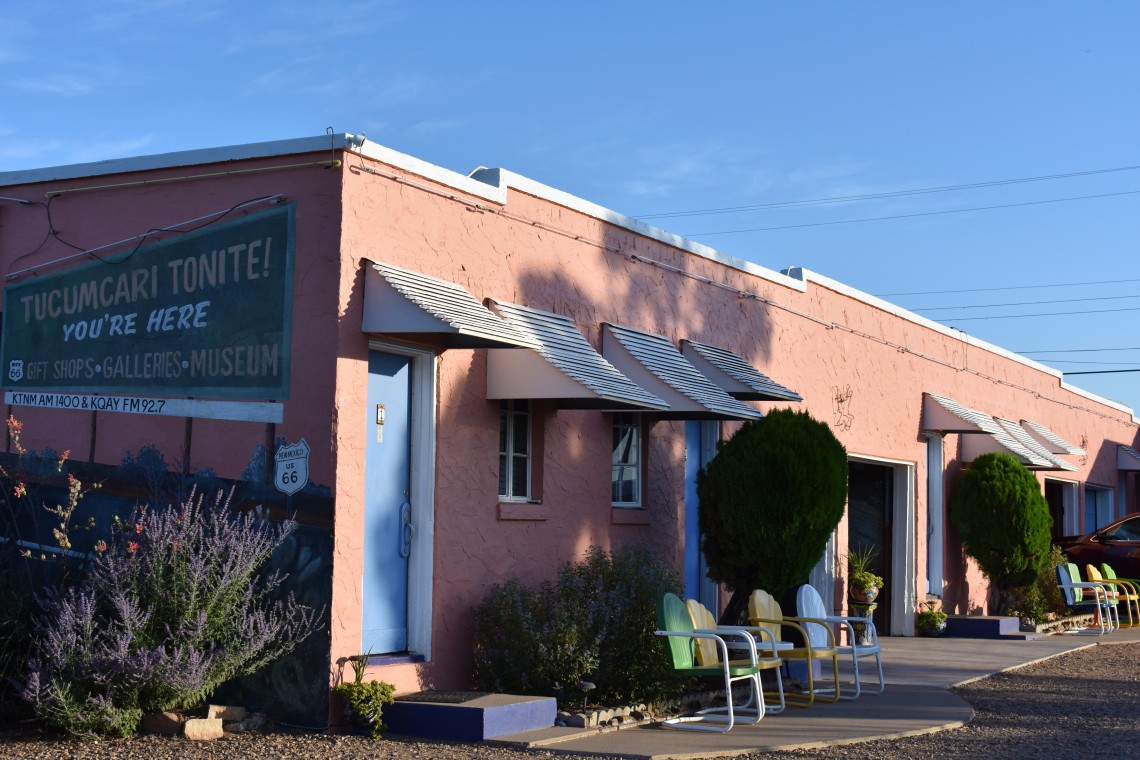 While I loved our stay at the Historic Route 66 Hotel, I really wanted to stay at the Blue Swallow Motel, because of their little attached garage, and their clawfoot tub in room 6.  I did stop by to take some pictures.  They also have a gift shop.

If like me, and most of your memories of Route 66 come from the Disney animated movie Cars, you’ll appreciate the neon sign at the Blue Swallow Motel.

While I wasn’t able to get a room at Motel Safari either, most of my information about Tucumcari and Route 66 came from Larry at the Motel Safari.  I loved the architectural tones of the hotel, built in what is considered a Googie or Doo Wop Architectural Style, so I was told.  This includes the unique lines, bright colors, neon and any space-age references.  The style was popular in the 1940s – mid 1960s.  Not doubting Larry’s word, I did turn to Wikipedia to learn a little more about the style, which then spiraled into hours of reading up on it across the internet, a history lesson I really appreciated while on our drive in Tucumcari and on Route 66 in Albuquerque.

The Motel Safari has melded their historic motel with more modern aspects, which I love.  There are also a couple of theme rooms, paying homage to local music and the television show, Rawhide, which was filmed nearby.

Still chasing that neon, we grabbed dinner on our first night in Tucumcari at La Cita, and it was good, authentic mexican, with a touch of Tex Mex.  I’m about the atmosphere as much as the food, and I just loved this restaurant, which has been open since the mid-century, closing in the early 2000’s but reopening a few years later with a new owner.  If all you do in Tucumcari is stop here to grab a bite to eat and the Tepee Curios for a souvenir, it’s still a place to stretch your legs that you won’t forget!

The New Mexico Route 66 Museum has amazing old cars and memorabilia of the Mother Road!  During our visit, a car show was being held at the Convention Center, and we were overwhelmed with old cars.  A few times I really wondered how I would ever get my husband to leave.

Mesaland’s Community College Dinosaur Museum showcases some of the dinosaur remains, much collected by students in the region.

Having Fun in the TEXAS Sun is on PINTEREST! Use it as a quick resource to find activities in different Texas towns! Click HERE!