We seem to travel almost every weekend, and one weekend in Austin was certainly more than an adventure than a trip, and it was a little bit batty!

My daughter and I set off to Austin without the rest of the family for what we have named our “Hostel Weekend”, because in addition to having lots of fun exploring the city, we also spent the night at HI Austin, a not-for-profit hostel on the shores of Lady Bird Lake.  To read more about the hostel, please click HERE.

From playing board games at night with people from all around the world, to a morning of make your own waffles in the common kitchen, we loved the experience of staying at the hostel!  We were also very excited about it’s location right on the Austin Hike and Bike Trail, so we had brought along our bikes to ride on the Austin Boardwalk, which opened Summer 2014 and linked the 1o mile loop around the lake. 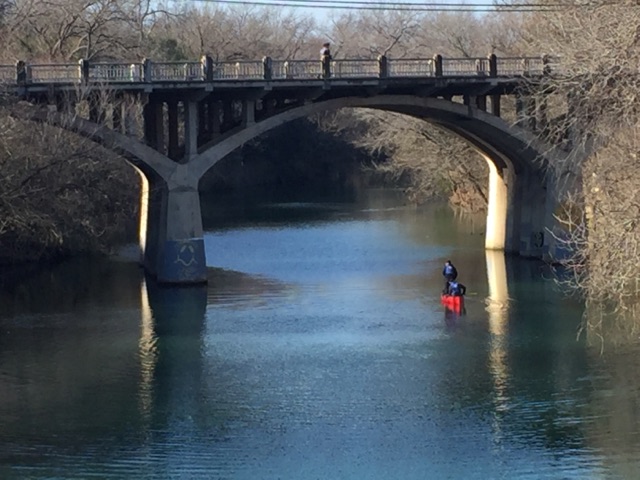 With temperatures in the low 30’s, it was very cold when we first set out, but by the time we had crossed over the lake, we were warming up and enjoying watching the dogs playing, families walking along the trail and even kayakers out on the lake, fly-fishing.

We had just left Auditorium Shores, and posing with Stevie Ray Vaugh’s likeness, a mandatory Austin-tourist thing to do, when we crossing under a bridge and my daughter abruptly stopped, saying there was a bat on the trail!  Assuming it to be already dead, I urged her along when she exclaimed it was still breathing!  We looked around and realized we were standing under Congress Ave. Bridge, famous for the millions of Mexican Free-tail bats that live here and darken the evening skies during the summer as they leave their roost under the bridge to rid Austin of flying insects!  It’s such an incredible sight that tourist come here just to watch, and the winged mammals have inspired the construction of the Austin American Statesman’s Bat Observation Center, Kayak Bat Tours, Bat Fest held each August and even giving Austin the nickname of Bat City. 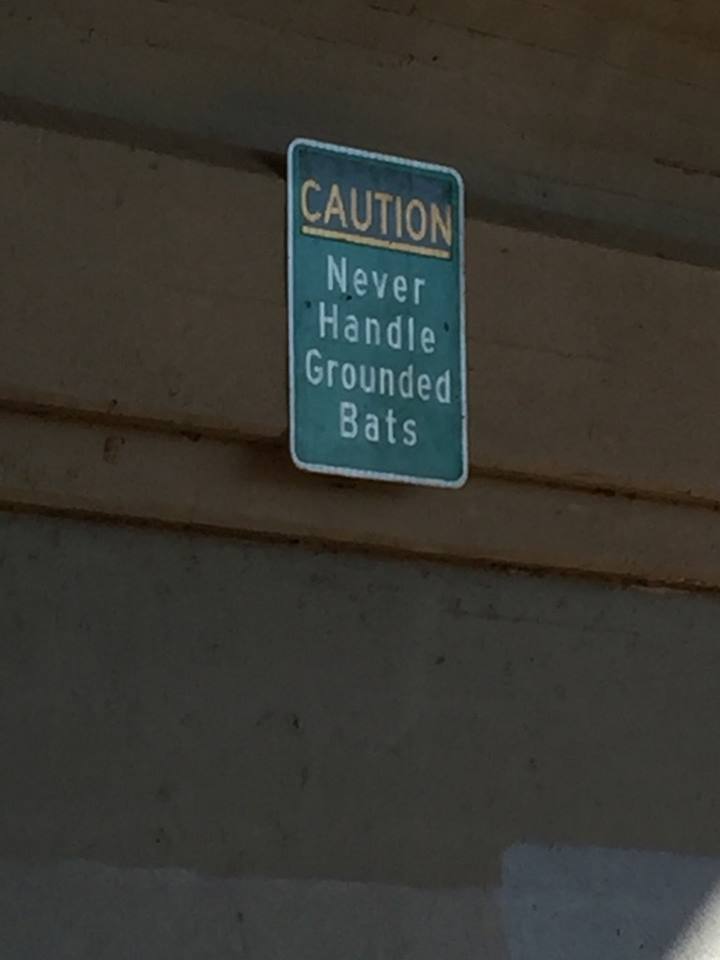 A sign under Congress Avenue reads, Do Not Touch Grounded Bats, and our little friend certainly seemed to be grounded.  We blocked the ground around him with our bikes to protect him from being stepped on by the passing trail-users, most of those who were oblivious to him as his brown color was a terrific camoflage on the same brown trail.  He was using his little “fingers” at the top of his wings to slowly pull himself along the ground, but not making much process, and slowly moving further out into the already narrow trail.  We knew he couldn’t stay there.

This wasn’t our first wild animal encounter.  We’ve found plenty of hurt animals over the years, rat-poisoned owls, baby possums that have fallen off their mother, even a baby deer our labrador kidnapped from it’s mother and brought home.  Not all, but many of those rescues had sad outcomes.

With high hopes and realistic expectations, we called Austin Wildlife Rescue, who directed us to Austin Bat Refuge.  My daughter, who at 14 has a phobia about anyone else touching her phone, called and after explaining the situation, was told that they would take the bat if we could bring it to him!   After removing and replacing  almost the entire contents of a nearby trashcan she returned holding a P. Terry’s Burger Stand cup like a prize!  She bequeath it to me, however, because of the way the small creature would open it’s mouth wide when we came too close.  We were unsure if it was an aggressive stance or perhaps in pain.  Careful to not touch the bat, which like any mammal can carry rabies, I quickly and as carefully as I could scooped it into the cup, placed the lid on and we were off!

If you’ve ever ridden through a now very busy Bike Trail on a Sunday morning holding a P. Terry’s cup with an injured bat in it, you know the feeling.  If not, let me express that it’s a little surreal.

Our return and drive to the Bat Refuge was, thankfully, non-eventful.  When we arrived at the small home in Austin, which we knew was the right place because of all the bat art on the front porch!

Dianne Odegard and Lee Mackenzie invited us inside and promptly began attending to our new little friend.  Diane, who works for Bat Conservation International, told us the little bat was cold-shocked, which can happen to bat when a cold front moves through, and they lose their grip.  She said otherwise, he looked altogether healthy and could probably be released in a few day after a few good meals when it warms up. We also learned that he was actually a she!

They often get injured bats.  Lee introduced us to a little eastern brown bat that was brought to them, suffering from a broken wing.  Unfortunantly, the wing won’t heal and the little bat won’t be able to be released.  While holding the bat, it was fed a small mealworm, and it was explained to use that when they feel safe and comfortable, they will “purr”, similar to a cat!  Amazing!

Under the impression that the bats migrated south during the winter, I thought that all the bats would be gone, but Lee explained that while most do move south, some stay, while others from further north stop here to spend the winter!  Not true hibernators, they can be seen leaving the bridge on warm winter evenings, anytime the temperature is right for bugs to be out!

They also explained that when the bat opened it’s mouth, it wasn’t a threat, but instead it was using echolocation to learn about us.  Bats use this incredible ability to navigate and catch insects.  They must be good at it, a single bat can catch and consume 1000 insects an hour!

Before we left, we had to fill out a waiver stating that we were not bitten or had direct contact with the bat.  Again, bats are known to carry rabies, as can any mammal, and the instructions not to touch the bats are more for the bats good than our own.  Should the bat have bitten or scratched either of us, it would have mandatorily had to have been euthanized to test for rabies.

We left knowing our little bat friend was in good hands with Diane and Lee, and a few days later we were able to follow up to find out that sure enough, after she had eaten and rested, she had een released one warm evening!  What a great story!

Our bat rescue was just part of our what we refer to as our Austin Hostel Weekend.  My daughter and I started at the Austin Aquarium, followed by a pork chop lunch at Shady Grove under the huge trees.  To work it off, we climbed to the top of Mount Bonnell, with incredible views of the Colorado River below!  We left our mark at the Castle Hills Graffiti Park, and waited in the never-ending line at the Magnolia Cafe, where I spiced up my life with a new love affair with Yellowbird Habanero Hot Sauce, made in Austin and incredible!  Our after dark window-shopping in the funky stores of South Congress Ave., or SoCo, was the follow-up to dinner at the legendary Threadgills, and dessert at Hey Cupcake! a food truck advertised with a bright pink cupcake on top!  It was a hard decision, as we also love Amy’s (naughty) Ice Cream, but that Sweetberry cupcake has never lied to me yet.  We also stayed at our first hostel, HI Austin, on the shore of Ladybird Lake, where we met people from around the world!  The 10-mile Austin Hike and Bike Trail winds right past the backdoor of Hi Austin, and we brought our bikes for a Sunday ride!  We rode the still-new Austin Boardwalk, petted pups in the dog parks, envied swimmers in Barton Springs year-round 70 degrees waters, and posed with Stevie Ray, but our biggest adventure was what we found lying on the trail under Congress Ave.!   To read the next post, please click HERE.